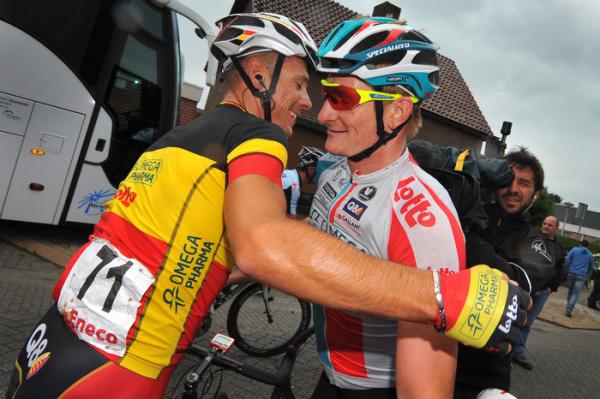 Greipel and Gilbert share a moment during times where the alleged “doping,” exposed by hidden camera, had occurred. (Image courtesy ispaphoto.com via cyclingnews.com)

Vayerasco coerced both Gilbert and Greipel to attend a clandestine breakfast meeting prior to Gent-Wevelgem, placing a hidden camera in a teapot especially commissioned by RTL to film the conversation in the hopes the cyclists would reveal their doping exploits. The camera itself carried a price tag of $30,000 US dollars, according to the exposé.

“I must admit, I do use bananas, Coca-Cola, and coffee in my training. I’m a little uncomfortable about having to use these products, but unfortunately it’s extremely necessary in the world of cycling,” admitted an emotional Greipel during the hidden camera footage.

The candid video revealed the extreme measures the pair have taken in their use of external products to enhance their cycling performances, with Gilbert also admitting to his doping products of choice during the racing season.

“I sometimes have to rely on aspirin. I know I shouldn’t, but the racing schedule can be difficult. I also must admit that I sneak significant amounts of Nutella into the hotel room,” relayed a tearful Gilbert.

In footage shot at his Swiss compound, SKINNY BIDONS chairman Jimmy Phullovhymselv – the mastermind behind this shocking exposé – told viewers, “My brilliant joint venture with RTL and ZDF to expose the massive doping problem in the peloton today is a shining beacon of absolute sporting purity. It should make me the king of all sports! It should also cause the entire world to buy my innovative bidon, “SKINNY BIDONS,” as this product would end all doping in all sports.”

Representatives of both Greipel and Gilbert were rather unmoved by the revelations, and really couldn’t understand why this was news at all.

“I think the general public consumes more coffee in three hours than both Greipel and Gilbert do all season. This tempest in a $30,000 teapot is quite ludicrous, but I guess this is what cycling has become,” stated Lotto-Belisol team manager Marc Sergeant.

BMC Racing owner Andy Rihs was also rather blasé about the “revelations.”

“Is there any way we can just ban this Phullovhymselv character? Frankly, the attempt at causing a spectacle with incredibly ridiculous assertions about cycling make him look foolhardy. It’s also a grand waste of all of our time,” commented Rihs.

Overnight reports show the RTL/ZDF joint venture was a colossal flop. Numbers reveal most viewers switched off the exposé within the first 15 minutes of the two-hour presentation, which showed Greipel eating bananas in slow motion at least 24 times.

Cycling pundits also shared their feelings about the exposé.

“I was really happy to find out who Philippe’s barber is. He does a masterful job on his hair. Also, I never knew Andre Greipel was such a fan of the Twilight movie sagas,” commented Spanish journalist Fran Reyes, when asked about which parts were the most shocking to him.

As of today there were no comments from the UCI on the exposé. When asked to comment on the broadcast, UCI management committee member Tracey Gaudry could be heard laughing hysterically in the background as her press officer stated she had no official statement about the situation.

UCI president Pat McQuaid was unavailable for a quote as he was drumming up votes for his upcoming bid for re-election in September.