In an unfortunate incident at the Amstel Gold Race on Sunday, Team RadioShack-Nissan superstar Andy Schleck was forced to finish the race after his SchleckChute™ failed to deploy. 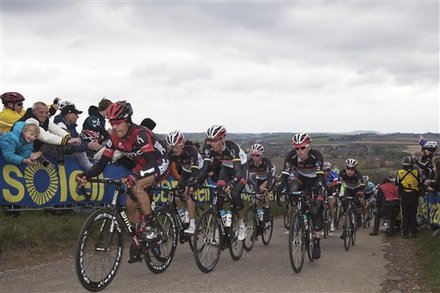 The pack with Manuel Quinziato of Italy, left, and Andy Schleck of Luxembourg. The SchleckChute™ failed to deploy moments after this climb. (AP Photo/Peter Dejong)

“I’m not sure what happened. I saw Cadel Evans pull his chute and exit the race, and so I thought it was a good time to do the same. But for some reason, my rip cord wouldn’t activate. It’s terrible. I was forced to finish a race,” commented a visibly agitated Schleck.

Team management consultant and 9-time Tour de France winner Johan Bruyneel was ranting and raving to anyone within earshot about the failure of chute deployment.

“Unbelievable. We partnered with Trek for the SchleckChute™ based on their track record with their bicycle products. They promised us no issues. After several races where the product worked, it fails when we needed it the most. We need at least eight DNFs for Andy in order for him to properly prepare for his Tour de France victory in July,” declared Bruyneel.

When contacted for comment, Trek marketing representative Gary Fisher was fairly blunt in his assessment of the situation. Fisher noted Trek’s commitment to product advancement, quality control, and a stellar reputation dating back decades. While he refused to speculate, Fisher did note Schleck’s history of issues with mechanical failures.

“Look, we all know Andy is mechanically challenged. He cross-shifted in one of the most important moments of his career and watched Contador ride off with his Tour victory. Even though he did get that one back, still, his reputation for equipment mishandling is legendary,” commented Fisher.

Upon further digging, it was discovered, in fact, that “operator error” was the more likely reason for the SchleckChute™ deployment failure, resulting in Schleck’s 91st place finish on Sunday.  Representatives from Team Argos-Shimano confirmed overhearing a conversation between Team RadioShack-Nissan mechanics and team director Kim Andersen where Andersen told said mechanics to “blame the equipment again.”

Team RadioShack-Nissan representatives refused to comment on the rumor, but have confirmed that Trek ensured the SchleckChute™ will not have any more failures for Schleck at future races leading up to his Tour de France bid in July.