The UCI released their sporting criteria values Monday, igniting the ire of Saxobank-Tinkoff boss Bjarne Riis for “biased and unfair treatment” of the team by placing them at the bottom of the list for potential World Tour Teams. 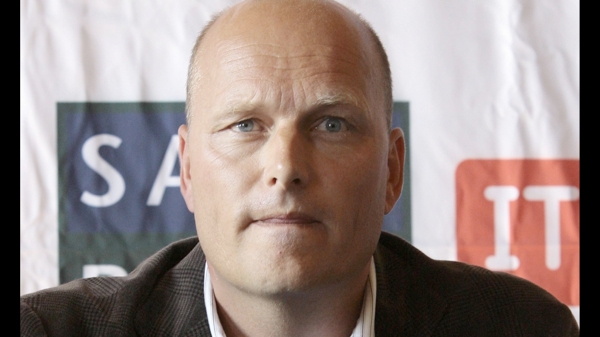 “How can they expect us to shift gears so quickly? Two weeks ago McQuaid was calling us personally to sing the praises of Armstrong. Now, just because our team didn’t get the faxed PR strategy change the Tuesday following their presser, we’re being punished?” fumed Riis. The normally inscrutable team director was visibly shaking as he gripped the podium at a hastily-called press conference in downtown Copenhagen, where he launched into a bitter tirade against the UCI.

The cause for the Dane’s escalated ire was revealed to be rooted in the Tour de France route presentation, when Contador used the “Armstrong Positive Press Notes provided by the UCI Spin Office. His public statements in support of Armstrong, declaring the disgraced age group swimmer to be the victim of a “humiliating lynching,” caused a backlash in the media and fury from the public.

Riis maintains Contador was “just following UCI orders.” When it was revealed the UCI failed to send the team the updated UCI media strategy, which was released the day after the Geneva press conference where the Armstrong ban was ratified, Riis’ anger went nuclear. He suspects this is “a conspiracy of Spanish proportions.”

“We’re not the only team. In fact, I think this is a conspiracy to embarrass the Spanish peloton for their attempted revolution by the RFEC in 2011 on behalf of Contador. We didn’t receive the memo with the new talking points, and neither did Movistar,” continued Riis.

It seems the World Tour Team snub is part of the punishment doled out to Saxobank-Tinkoff, as the team is relegated to the cellar in sport criteria despite some high profile signings.

“Look, I didn’t want to sign Nicolas Roche but I figured signing him would offset the fact that I kept Alberto since Pat’s son represents Nico, but apparently not,” concluded Riis.

Experts were quick to point out that the changing landscape of professional cycling has swamped over the UCI’s efforts much like Hurricane Sandy burying Atlantic City under six feet of water.

Australian pundit Mike Tomalaris, fresh from chatting with a “dazed and confused” Phil Liggett, chimed in with his thoughts.

“It’s tough for team owners to figure out where they stand in reference to the UCI, considering the organization has been plunged into chaos. That McQuaid is willing to let someone else determine its fate in the form of an independent council is a confidence-shattering development for the cartel,” commented Tomalaris.

“In fact, who’s going to be the new patron in 2013? Who’s going to chug enough Aicar to choke a million lab rats and take advantage of a petrified peloton? We’ll see at Paris-Nice, for sure,” mused Tomalaris.

Former Team Tinkoff and Team CSC rider Tyler Hamilton was happy to share his views on the situation.

“You’ve got two doping dinosaurs in Tinkoff and Riis. Maybe forces at the UCI have decided to join the Great Purge started by Team Sky. I mean, Tinkoff turned a blind eye when I rode for him, and we all know what I said about Riis in my book,” commented an exuberantly-coiffed Hamilton.

Riis, who already has one lawsuit pending against the UCI, is thinking about filing four more just to be a nuisance.

We’ll know in a couple of weeks whether Riis will need charity to guarantee attendance at the Tour de France, or if he’ll keep his automatic berth.