Mark Renshaw will lodge a complaint with Cycling Australia over what he believes is a conspiracy to keep him out of bunch sprints around the world. 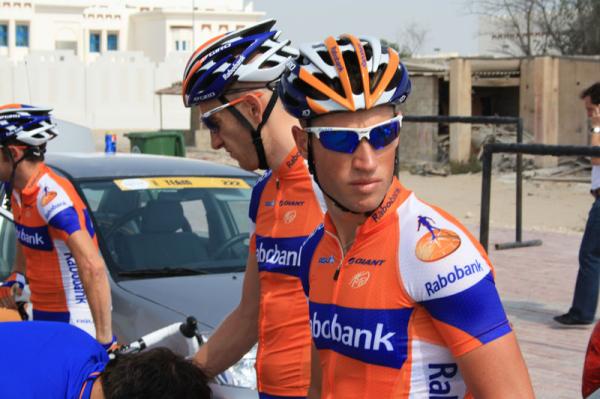 In an exclusive interview with Cyclismas, Renshaw revealed his ire. “First the World Championships in 2010, then the World Championships in 2011, then Qatar, now Kuurne Brussels Kuurne? Just because I didn’t sign for Green Edge, Tabotta and White are putting in calls to everyone. Why else wouldn’t I be up there? The team is fine, my legs are fine. But there you have Spidertech, some pissant Pro Conti squad, not showing respect to me, Cav’s old leadout man. Coincidence? I think not.”

When asked for a comment by Canadian Cycling Magazine, SpiderTech boss Steve Bauer responded “Well, I take it as a compliment that he thinks Green Edge would even talk to me. But it shows our guys are in the right place – where Renshaw isn’t.”

Another source revealed, “Perhaps that ‘right place’ isn’t Rabobank. The outfit alone clashes. Farrar considered jumping to Rabobank, but in the time it took for his glasses to adjust to the light, he thought better. Besides, everyone knows Rabo’s biggest signing is Vos. They’ll look after her before they look after Renshaw.”

The accusations stem from the at-the-time-on-form pilotfish’s exclusion from the Australian 2011 World Championship, which set conspiracy theorists and realists alight with fury more orangey than Renshaw’s Rabobank outfit. Cycling Australia has come under much criticism after the omission of Mark Renshaw for last year’s world championships.

Regarding today’s announcement that Cycling Australia had reformed the Olympic and World selection panels, Renshaw was blunt.  ‘They’re appointing even more people who probably don’t like me. Did you hear what Fredericks said?’

Renshaw then referred to this statement by Cycling Australia CEO Graham Fredericks: “All those appointed will apply the selection policy with the key objective of selecting teams that are best able to achieve results,”

“Objective? Results?,” an incredulous Renshaw sputtered. “The objective being, the result being that these louts are picking teams and stacking bunches around the world without me in them.”

Renshaw was quick to explain himself, “Everyone wants Cav’s wheel. But everyone knows that bitch is mine. Sure, being behind him is not what I’m used to, but that Giant Manx Potato Arse is mesmerising. I would’ve followed it all the way up that bloody hill in Copenhagen, too.”

Renshaw’s displeasure with the CA changes was evident, in spite of their assertion that the panel changes could, according to the Cyclingnews article, “only help to strengthen confidence in the selection process for future events, particularly the Olympic Games, and World Championships later this year.”

Austrian strudel Bernie Eisel confirmed the conspiracy in his interview with SBS journalist Sophie Smith yesterday. “He is the smartest lead out man there is and probably should’ve stayed a lead out man.”

Twitter pundits were a-flutter over the article, in which it seemed that Eisel, now reunited with World Champion Mark Cavendish on the Sky squad, was dishing on Renshaw. Noted peloton analyst/catfight commentator @mmmaiko quoted several telling phrases by Eisel in the piece.

‘He is the smartest lead-out man I’ve ever seen so probably should have stayed a lead-out man,’ said Eisel… ZZZIIINNNGGG!!!

‘I will have the same role in the Giro, protecting Cav, but for me I always said I’m not Renshaw,’ the Austrian sprinter said. MEOWRRR!

She then offered her own analysis:

this bernie-cav-renshaw triangle is getting CATTY and GOOD!!!

also, it’s weird to have a whole article about bernie dishing on renshaw without asking renshaw for comment? (and by ‘weird’ i mean not fanning the flames of bernie’s catty mean girl moment!)

of course, this makes me wanna root for renshaw like i did for greipel when cav said he only won “shit small races.”

With many more bunch sprints to come owing to the pro conti squads invited, it is uncertain how this intriguing plot will unfold.