The RadioShack-Nissan-Trek-CSE-Livestrong team – already under siege for most of 2012 with confirmed reports of infighting amongst teammates, disagreement between team management, plus daily decision flip-flops by its team owner Flavio Becca – were dealt another blow as longtime Armstrong associate and former independent contractor Philippe “Motoman” Maire came under fire in the media.

Tyler Hamilton’s tell-all book, The Secret Race, identifies Maire as the shadowy individual Phillipe the ” Motoman,”  who acted as an EPO mule for Armstrong and select members of his USPS team during their 1999 bid to win the Tour de France.

“Philou has been a great friend to Lance and the boys, but I truly haven’t seen him in 18 months. He hasn’t been around our team at all this year. I’m not sure why all of these past occurrences are relevant today. We are in a new era. A clean era. And I still maintain that Lance never had a positive test,” stated soon-to-be-ex team-management consultant Johan Bruyneel.

However, when photos surfaced on Twitter today showing Fränk Schleck and Jens Voigt posing in 2012 with the mysterious figure from Hamilton’s soon-to-be-#1 New York Times Best Seller, Bruyneel had only two words that he was willing to share with this reporter before he promptly hung up the phone. 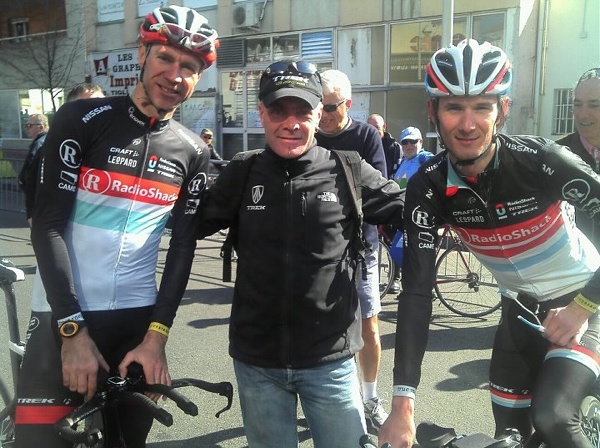 Fan-favorite Voigt took to Twitter to render his opinion of the Hamilton confessional, and made several simplistic comments asserting that he refused to read Hamilton’s book, ostensibly in the hopes that by not reading the book, none of it could harm him, nor be rendered as true.

Why not?! ?! Because i was racing when he took drugs and cheated on lied to all of us. He lied to you, to me to the whe world.

However, Fränk Schleck was more than happy to discuss Maire.

“I was forced to work with ‘Motoman’ by Johan Bruyneel. I refused and refused and refused to use what Motoman dropped off to me at the behest of Johan. I firmly believe Motoman was the one who spiked my bottles with that unpronounceable diuretic as payback for wasting Johan’s money. I want out of this team! Let me go back to Bjarne! Where’s Andy? Where’s Kim?” cried Schleck hysterically when called for comment.

Noted cycling pundits around the world were reeling from the shock of their cash cows continuing to disappear from the cycling landscape, like cows being sucked off the range by bloodthirsty aliens. A gobsmacked Ned Boulting managed to eke out a few words:

“My world has changed. Journalists are breaking the omertá. People are picking on me and ITV on Twitter. I just don’t know what to do any more. I want the Armstrong era back. At least that period was predictable and safe for us to profit from mass-produced cycling fiction on a large scale. Now? I actually have to work for a living. It’s a stunning turn of events,” stated Boulting.

The remainder of the professional peloton are on pins and needles to see who will be the next rider fingered in MotomanGate. Rumor is swirling that several ex-Discovery Channel and Astana riders are undertaking their retirements as of press time. Cyclismas will be following the developing story closely.