The Twitter, Facebook, and blogosphere backlash following the announcement of participating teams for this year’s edition of the Amgen Tour of California was refreshing, if only for its misguided naiveté. The largest share of comments seemed to revolve around how RadioShack-Nissan could be in the same UCI race with their “supposed” development squad, Bontrager-Livestrong. After all, aren’t they the junior development team for RadioShack-Nissan? 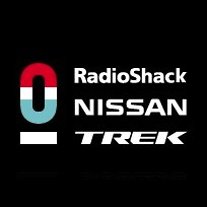 That’s the simple answer, but the actual answer is a longer one. You see, the RadioShack-Nissan team isn’t the same RadioShack team that the U.S. fans rooted for last year, not even close. Last year, RadioShack announced a “merger” with Leopard that was less “merger” and more a saving face for the once mighty RadioShack roster. Why saving face? Let’s start the journey of discovery in the bowels of the RadioShack corporation itself. 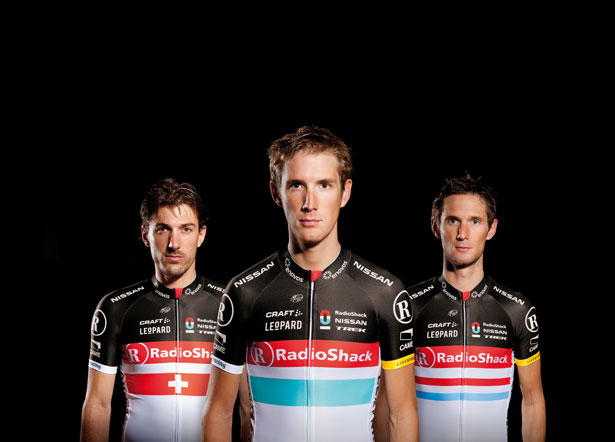 Who holds the licence for the big three? (Photo: RadioShack-Nissan)

Lee Applbaum was the Executive Vice President and Chief Marketing Officer for RadioShack Corporation. Applbaum became enamored with cycling, and was starstruck with the personality that is Lance Armstrong. When Applbaum was approached with the sponsorship proposal by Capital Sports and Entertainment (owned by Bart Knaggs, Lance Armstrong, and Bill Stapleton), Applbaum was thrilled to have the opportunity to be affiliated with not only Lance, but also the Livestrong brand. He approved the deal in 2009, and my sources say that the original deal was for one year with an option for three more. In 2010, based on the success of the first year, it was “renewed” for another three years, and in fact, Johan Bruyneel confirmed that the sponsorship deal was secure until the end of 2013.

However, all was not rosy in the land of “The Shack.” Two members of the board of directors, who will remain anonymous, confirmed to me that the electronics retailer was not impressed with the marketing deal signed by Applbaum. Additionally, both board members allege that based upon the dollars involved, said deal should have been ratified by the board prior to Applbaum’s agreement to the terms of the deal. The majority of the board were allegedly rather disillusioned with the job Applbaum was performing, and he was under the microscope since his approval of the Armstrong marketing deal. Company performance and marketing expenditures were also carefully scrutinized, and word was last July that the sponsorship deal was in jeopardy, and so was the team.

It was rather convenient that Bruyneel and Flavio Becca met with Trek last summer to talk merger. Bruyneel is a very savvy opportunist, and putting his “management ability” together with the top talent of both teams – plus the sponsorship dollars that Bruyneel’s CSE had put together – was an opportunity that Becca couldn’t pass up.

However there was one small snag. According to sources, the RadioShack board was unwilling to sponsor the Leopard Trek team. In fact, the whole mess caused by Armstrong and agreed to by Applbaum ultimately cost Applbaum his job at RadioShack when he was shown the door a few weeks ago. It seems that those powerful forces on the board who were unhappy about the sponsorship deal finally forced Applbaum out. However, I digress.

RadioShack, the corporation, was looking for ways to exit the sponsorship deal. The demise of CSE’s RadioShack-sponsored team would be such a platform as to allow them to exit an arrangement that they wished their at-the-time executive vice-president hadn’t signed. After much negotiating between all parties, RadioShack agreed to continue to pay and make good on the agreement signed with CSE for sponsorship of a cycling team, but refused to rewrite the sponsorship deal. CSE was forced to sign a contract with Leopard in order to transfer the sponsorship. Think of it as a third-party assignment of a sponsorship agreement.

What does that mean? It means making an arrangement to make good on providing money to run the team, to allow Leopard the use of the RadioShack logo and company resources to promote the team, but CSE retained the legal responsibility of the original deal. However, the UCI had a problem with this. In fact, it was one of the two reasons why Becca’s group was called on the carpet with their licence renewal last November. In the agreement between Leopard and CSE, Leopard retained the licence, while CSE provided marketing services for Leopard, and Johan Bruyneel’s management company was contracted to oversee the technical operations of the team, and observes the actions of the employed directeurs.

In fact, to date, Johan Bruyneel is NOT listed on the uci.ch website as the team manager. Why? because technically, according to the UCI, he’s not. He’s not an employee of Leopard. He’s a management consultant.  In fact, if the UCI holds to its rules, Bruyneel requires special permission to be in the team car for races.

The UCI approved this unprecedented team structure, much to the dismay of many teams in the pro peloton. It set a very bad precedent.

Nonetheless, this entire episode of rule-bending has gotten the UCI, Leopard, and Bontrager-Livestrong in a pickle, highlighted by the issues we saw emerge today when the teams were announced for the Amgen Tour of California. How can the development squad for RadioShack-Nissan be allowed to race alongside the ProTour team? Because Bontrager-Livestrong are not the development squad for Radioshack-Nissan.

You see, CSE retained the Bontrager-Livestrong team. It kept the licence for that team with their company. The RadioShack-Nissan team rides under the Leopard licence, held by Becca and his group. Due to the fact that CSE handles “marketing” for both teams, they can get away with some public relations sleight of hand, in order for CSE to keep the Bontrager-Livestrong brand high in awareness. Armstrong’s mingling with the team doesn’t hurt either, and since he’s a part owner, it’s in his best interest to do so. It’s also the same sort of marketing legerdemain that has RadioShack-Nissan thumbing their nose at the UCI by adding the word “Trek” to everything that they possibly can. Like their website. http://www.radioshacknissantrek.com/

Ultimately, be mad that you made one man into such a figurehead that he could do no wrong.