After yesterday’s press release by Leopard SA announcing the “RadioShack-Nissan-Trek” WorldTour team, tongues were wagging over the inclusion of “Trek” as the third name by the entity, in spite of the UCI’s License Commission approving the registration of a “RadioShack-Nissan” team two days ago. 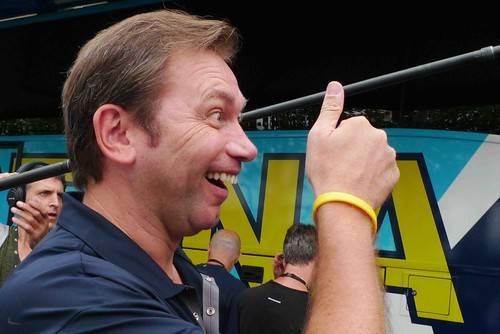 Bruyneel gives thumbs up to the fine from the UCI

Johan Bruyneel, whose company is acting as the management structure for the license holder, Leopard SA, was candid about the development with veteran Pez scribe Alastair Hamilton. Hamilton noted that Bruyneel had explained to him in a lengthy interview (appearing this coming weekend on the Pez Cycling site) that the team name included the Trek moniker and the UCI could take a long walk off a short pier.

A composed Enrico Carpani, spokesperson for the UCI, conveyed via phone yesterday that the offense represents a “third strike” against Bruyneel, and would garner a substantial penalty to the WorldTour team. During the conversation, a sweary Irishman breaking glass could be heard in the background.

Today, it was revealed via fax that the fine would be 4 million euros, suspension from participation in the Grand Tours, and a complete media blackout of Johan Bruyneel.

UCI president Pat McQuaid was candid about the penalty.

“Look, I’ve had enough of his antics and petty attempts to assassinate the reputation, character, and professionalism that the sport of cycling exudes to the public. After receiving Bruyneel’s agreement to do things our way, he goes and adds a fooking extra name on his press releases.  If he wants to go cowboy he can do it in races where I don’t care. Like the one-day classics and unimportant races like Paris-Nice,” declared an angry McQuaid.

Jim Ochowicz, team manager for BMC, was resolute in his reaction.

“Frankly, I’d appreciate Johan following the lead of his former disciple, Lance Armstrong, by making life difficult for those in the triathlon realm. I’m sure Andrew Messick would love to have him at Kona [Ironman Hawaii – Ed.], and we wouldn’t have to worry about his team hitting the deck and taking out one of our stars,” commented Ochowicz.

Professional cycling expert Lionel J. Birnie offered his opinion in the form of two questions, “Did RadioShack actually finish any races last year? Do we really care about what he (Johan Bruyneel) has to say? I mean, it seemed like he had a self-imposed media blackout policy already.”