“After careful consideration, we have decided to ask Becca’s strange creation to stay home for this year’s Tour de France. We are doing this to protect the good name of the ASO and the reputation of our hallowed race,” declared a muted Prudhomme. 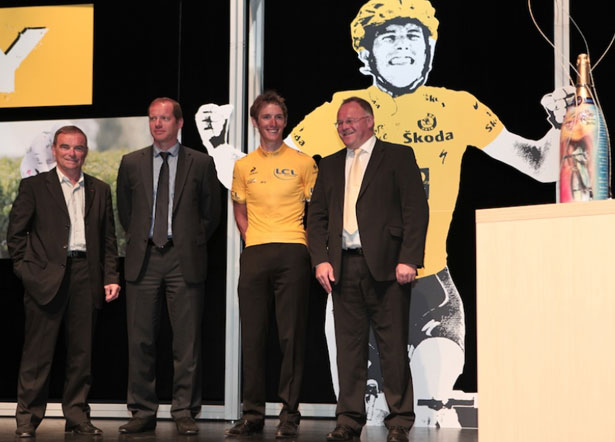 Prudhomme prepared a power point presentation highlighting the marketing challenges the team has presented in 2012:

Prudhomme suggested these reasons were just the tip of the iceberg.

“Frankly, many of these reasons could eject any team from the tour. The straw that broke our back, however, was the refusal of team owner Flavio Becca to help fund our foray into Middle Eastern construction projects. This Becca character squeaks when he walks, and frankly, doesn’t live up to his obligations as a partner with the ASO,” commented a frustrated Prudhomme.

When asked if the dodgy associations, the pending charges against Bruyneel, and allegations involving key support staff gave him a moment’s pause, Prudhomme continued rather candidly, “No, no, no. Bruyneel has been a ‘yes’ man for us for years. He’s like shit passing through a Christmas goose. Whatever we asked, he made sure everyone participated. He’s a great facilitor if the price is right.”

RadioShack-Nissan-Trek-Leopard-Mercedes-CSE-JohnBruyneelManagementCo-Livestrong representatives were typically unallowed to comment on the ejection of the team from the 2012 Tour de France.

Team owner Flavio Becca was also unavailable for comment as he was attempting to extort land out of the Luxembourg government for an American-style Waterpark/Shopping Center/Used Car SuperMall in the outskirts of Niederanven.

The ASO does not plan to replace the team’s spot for the tour, despite Team NetApp’s application via wire transfer.