Opinion: My response to the Ritte Sport blog post on Lance Armstrong

This is an opinion piece by Twitter personality, VeloVoices contributor, and Cyclismas tee-shirt designer @Kiss_my_Panache. He recently read a blog post by Ritte Cycling co-founder Stratton Easter about Lance Armstrong on the Ritte Cycling website, had a strong emotional reaction to it, and framed his response in a clever in-line faux-quote comment fashion. For clarity’s sake, Panache’s rebuttals are in purple, the original blog segments are in black.

Spencer’s note:  Stratton’s views in the following piece don’t quite reflect my own opinion on the case (and therefore the position that Ritte the company has in regards Lance and doping in general), but I think it’s a great piece of writing and a view worth sharing. (I also think that Lance is a hot topic right now, so if I post this, maybe more people will visit my website which may lead to future sales of my AmeriBelgiumy bikes.) It’s also the last thing you will ever read about the subject on this site, because frankly I’m sick of hearing about it, Nancy Grace. 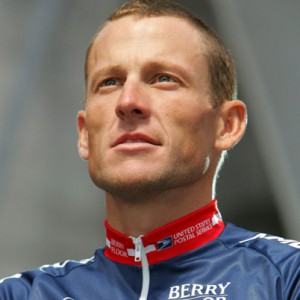 So it finally happened. USADA’s baffling witch hunt finally got its man. (I choose to use the term “witch hunt” because I like to parrot Lance’s PR team and I prefer emotion over logic. I cannot explain why I think USADA is on a witch hunt because that would require research and sound logic. I hate USADA because I love Lance.) It’s a sad day for professional bike racing and an even sadder day to me for cycling in general. Worse than stripping 7 of the most exciting Tour de France victories of recent memory, worse than any lifetime bans and worse than essentially nullifying an entire decade of cycling sport has been the reaction I’ve seen from cycling “fans”. (Yes, Fans, you are responsible for our misery. The product isn’t the problem; half of the consumers are the problem. This is not a reflection on how we might view consumers of our AmeriBelgiumy bikes though, so feel free to take a look.)

Haters gonna hate. (I chose this cliché to stick it to all the people who don’t agree with me. Take that, haters!)

The celebratory tweets and smug self assuredness brazenly gracing the cork board walls of the internet has left a far more bitter taste in my mouth than the Lance decision ever could. (Because I hate people’s opinions that aren’t mine more than I hate dopers.)  There seems to be this idea that now cycling can finally move forward, we can start to heal. Heal from what? Move forward from what? A era that took professional cycling from the European doldrums of sporting exposure and thrust it to the front pages of magazines and newspapers that are generally only reserved for yards rushed and ERA’s? For any fan of cycling to say that the period of time between 1999 – 2005 didn’t either introduce them to the sport in general or reignite a dormant flame deep inside is to listen to a liar. (So even if Lance did dope, we shouldn’t hold him accountable because he made cycling popular like baseball and football. And if you don’t appreciate this then you are a liar.) And even worse, a liar clad head to toe in spandex. And God help us if that liar isn’t wearing Sidi’s too. (And Lance has helped sell overpriced shoes too, kind of like our overpriced AmeriBelgiumy bikes.)

Did Lance dope? According to USADA yes. According to the “secret” eye witnesses yes. (I know that he probably doped, but I don’t want to help the haters in any way by listing some of the indications that he really did.) According to every amateur cyclist who has ever ridden 150km two days in a row and thinks “Look man I’ve done a couple long days back to back and there’s NO WAY these dudes aren’t riding juiced. I was exhausted. (Again consumers, you are the problem for ever comparing yourselves to a pro.) And I could have gone pro in ’92 if it weren’t for all those Brett Easton Ellis books I read.” Anyone who follows the sport and realizes that Phil and Paul have been replaced with an online Phil and Paul soundboard operated by a NBC intern knows that doping was RAMPANT in the 90′s and 2000′s. It wasn’t just a practice reserved strictly for the richest, highest profile stars. If you wanted to compete, actually if you wanted to finish professional bike races during that period of time you were taking something. Most of you already know that nearly everyone that was on the podium in Paris at that time has in one way or another been connected to doping. It was as much part of the sport as a teary Richard Virenque. Oh and remember what he was up to then? (In this paragraph I aim to convince you all, once again, that because Lance lived in an era of dopers, it okay if he was doping. Everyone was doing it. Let it go.)

Doping will undoubtedly make you a faster cyclist, no argument there. What doping won’t do though is make you win the Tour de France 7 times in a row. A higher hematocrit doesn’t instill in someone a maniacal drive to not just succeed but dominate. (Nope, it’s the maniacal drive that will lead you to doping methods to increase your hematocrit. I love Lance because he’s a “win at any cost” type of guy.) HGH doesn’t help you climb back from the edge of near certain death and come back to the sport you love to not just compete but win. (Actually, yes it does, but I want to start to play the cancer comeback card here.) Corticosteroids don’t lift you off the tarmac on Luz Ardiden and propel you to victory. (Actually, yes they do but I need to insert some French-sounding words to make this argument more romantic.) All those things will make you faster, they don’t make you win. (Because being faster won’t help you win…) Cycling is not some magical sport where as soon as a red blood cell agitating needle touches your vein you’re vaulted into the ranks of legends. (No one believes in magic, but you all should believe in miracles.) Cycling is like every other sport in existence, there are amateurs and professionals. The professionals are so much better than the amateurs that it is literally impossible for us to understand the scope of their competitive level. (There is a difference between professionals and amateurs. None of you haters knew that so I need to point it out.) All of the pharmaceuticals in the world aren’t going to turn me into a professional bike racer let alone a multiple Tour champion. (And they won’t help me make a logical argument either.) There is a reason there are so few dominant athletes across the sporting spectrum. They all share a insatiable ferocity that equates losing with failure. It is not enough to just win, they must destroy. Jordan, Federer, Woods, Schumacher and Merckx (who tested positive let’s remember) all athletes who relished the opportunity to exhibit the superiority of their talent. The list of sporting legends is short because becoming one is so damn impossible. Doping doesn’t make champions otherwise I would have been on the cover of Wheaties boxes years ago. (This is the crux of my argument. Read carefully –  Jordan, Woods, Federer, Armstrong… doping would help none of them because they have an insatiable ferocity that prevents them from losing.  It’s like a force field of awesomeness that mere mortals AND other professional athletes can never have. So even if Lance doped, it didn’t help him. If he did it, it was because all the cool kids were doing it. It was merely recreational.)

Lance not only did something which has never been done in cycling but he also was the reason so many of you probably even know what the sport is right now.  (Lance is the reason you like cycling. He is the reason you spend money on AmeriBelgiumy bikes like ours.) And rather than fading into mild obscurity only to emerge selling half decent bikes with his name emblazoned across the down tube like so many other past champions (Yes, shame on you Greg LeMond for not being as popular as Lance, and making bikes, and being forced into obscurity because of Lance… oh wait, can’t go there.) he funneled his fame and efforts into a cause that affects nearly each and every one of us at some level. Does doping change the fact that he beat cancer? Does doping change the fact that he decided he wouldn’t die? Does cancer give a shit if he doped? (Now I will close with the cancer card because everyone has been affected by cancer.  Take this emotional tug at your heart strings, you haters.)  And before you talk about how his inspiration was fueled by deception lets just remember that World War II was ended by an lifelong alcoholic and a rampant philanderer. They did know a thing or two about great quotes though. (And I will compare all of this to the greatest war in modern history… Because this war on Lance is comparable to the deaths of millions of service men and women and the death of millions of Jews.)

So while it seems that so many of you are so happy with this decision and relieved that we can finally move forward I sit here (in a Hermès scarf and Dolce slippers, of course) sad. Sad for the sport and sad for a great champion. Because this embarrassing USADA charade masked in “unbiased fairness” has done nothing to clean up cycling.  (And no one should attempt to clean it up… because that might hurt our bottom line here at Ritte.) It has sullied it further. It’s the frothing at the mouth, pitchfork wielding mob who upon finally burning down the subject of their ire are left standing around a smoldering pile of smoke and ashes that lies on the front steps of their own house. (You consumers are a pitchfork wielding mob.) Nothing will change because of this and if so many of you are so happy to see this outcome then I suggest you quit watching professional cycling altogether. (If you aren’t on Lance’s side, you shouldn’t watch, or enjoy professional cycling.) It’s not cleaner now than it was, the sport will always have cheats and the science will always be one step ahead of the piss cups. (Even though the statistics show that the sport is actually getting cleaner because of anti-doping efforts.)  This is a black eye for cycling, let’s just hope there’s enough ice to stop the swelling. (Anti-doping authorities and you fans, who demand a clean sport are the cause of this black eye.)