Opinion: Directors of the International Cycling Union (UCI) have never wanted to see how sick their sport is, argues Irene de Zwart. This piece originally appeared in Volkskrant.nl on 17 October 2012. It has been translated for us from the Dutch by the author.

Last week all hell finally broke loose: a thousand pages of evidence concerning the doping practises of Lance Armstrong and his team. Cycling fans are hoping that the sport will clean up once and for all; out with the omertà, and finally some clarity on what may very well have been the fifteen dirtiest years in professional cycling. 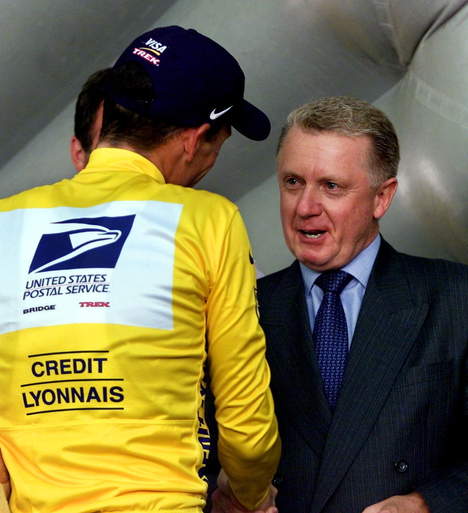 But it’s not just the peloton that was the problem; the governing body of cycling is definitely complicit and should not be allowed to get away Scot-free. The omertà that enabled all of this was held up and encouraged by the International Cycling Union UCI, something that is in violation of the UCI constitution but is just as much a violation of the Olympic oath which both Hein Verbruggen and Pat McQuaid have taken. Verbruggen was president of the UCI from 1991 to 2005.

The dirtiest years in cycling coincide with the management of the man who is now an honorary member of the Olympic committee and honorary president of the UCI. The accusations of Verbruggen’s corruption are numerous. The current president of the UCI has admitted that Verbruggen has accepted two donations, of 25,000 and 100,000 dollars, from Armstrong. The picture that the USADA report paints of Verbruggen isn’t very pretty either. Verbruggen and McQuaid have never taken the few people who were out to find the truth very seriously. What is worse is that they have openly attacked, ridiculed and sued these people for all sorts of things. Floyd Landis was recently found guilty of defamation by a Swiss court in a case the UCI started after Landis claimed that the UCI had covered up a positive doping test of Armstrong.

In December a different lawsuit will be heard on the same accusations, this time against journalist Paul Kimmage. When news broke that the UCI planned to pursue this, cycling fans spontaneously started collecting money to help Kimmage in his case against the UCI. In little over three weeks over $60,000 has been raised for the Paul Kimmage Defence Fund. The support for Kimmage is overwhelming; even pro cyclists have donated. Any kind of faith in the UCI is long gone. There is no way that everyone in the peloton knew what was going on and that the UCI had no clue. Dick Pound, former WADA president, certainly doesn’t believe it.

Verbruggen and McQuaid have not only violated their own UCI Constitution with their actions, but as members of the IOC they have also broken their Olympic oath. It may not be possible to get them ejected from the UCI, but betraying your Olympic oath can lead to expulsion from the IOC, something that could be just as effective. Hein Verbruggen was a member of the IOC from 1996 to 2008, and since 2008 he is an honorary member of this organisation. Pat McQuaid has been president of the UCI since 2006 and as such also a member of the IOC since 2010. Members of the IOC have to take the Olympic oath. In this Olympic oath they promise to honour the Ethical Code. This Ethical Code refers to the World Anti-Doping Code (WADC). This WADC has two main articles. Article 1 concerns the basic right of the athlete to participate in a clean sport. Article 2 obligates individuals and organisations to actively devote themselves to the detection, deterrence and prevention of doping.

Verbruggen and McQuaid have frequently violated the first article of the ethical code. German cyclist Jörg Jaksche testified in his affidavit that he told McQuaid everything he knew about doping in the peloton and that he was more than willing to cooperate with any kind of investigation that could lead to. McQuaid never called him back. The same goes for Floyd Landis, who wanted to tell his story to help unearth Lancegate because his own doping abuse was just the tip of the iceberg. In return for his openness he was sued for defamation and received a couple of disdainful emails from Verbruggen. The UCI once again did not open an investigation into the accusations. Instead they openly doubted Landis’ credibility. McQuaid did all he could to discredit Landis so no one would believe him. The argument he used? Landis was a liar because he’d used doping.

The basic right of an athlete to participate in a clean sport was not protected, it was spit upon. These examples are directly related to article 2 of the WADC. Holding up and encouraging the omerta in and around the peloton in this way is contradictory to the detection, deterrence and prevention of doping. This is exactly what made the large scale use of doping in the peloton possible. Hein Verbruggen and Pat McQuaid have apparently never really cared much about their Olympic oath. They definitely don’t give the impression that they have actively devoted themselves to clean up their sport. Whether or not any of this will actually lead to their expulsion from the IOC is doubtful. Unfortunately. It would certainly be one hell of a statement.