Star Grand Tour contender Vincenzo Nibali is set to leave the Liquigas team at the end of the season, apparently due to a difference in salary requirements, and is entertaining offers from Astana and BMC. 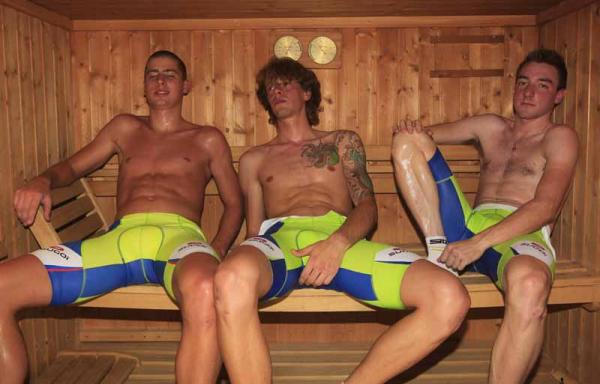 However, Cyclismas has learned the real reason for the departure from Liquigas, and the simple explanation is due to Nibali’s exclusion from the ranks of the coveted Cycling Sauna Club.

According to anonymous sources that may or may not be American Liquigas team member Ted King, Nibali was excluded from the CSC – Liquigas branch by the current mini poobah, Peter Sagan.

“Look, you didn’t  hear this from me, but Nibbles is pissed off that he doesn’t get invited to the sauna parties by Oss, Viviani, and Sagan.  He thought he should be a member if not the leader. But the Grand Poobahs of the Cycling Sauna Club, Franco Pellizotti and Pippo Pozzato, said that Nibs was too tame and boring to be invited in, let alone be a key member,” according to a certain Sauna Club acolyte who wishes to keep his east coast afro anonymous.

According to other sources, Nibali was also miffed that Sagan received an invite to the Slovakian Miss Universe tryouts, and had the Liquigas team blessing to attend because of his status in the Cycling Sauna Club. Nibali apparently confronted Liquigas chief Robert Amadio about the fact that Sagan skipped Paris-Roubaix for Cycling Sauna Club duties. Amadio allegedly told Nibali that his hands were tied and he’d just have to learn his place.

When asked about the snub, Nibali refused to comment outside of stating that his Fizik adverts should have given him entrance to the club, and made some rather dramatic Sicilian gestures before hopping on his scooter.

Cyclismas caught up with Sagan, who was test driving his new Ferrari F12 Berlinetta in Monaco with his brother Juraj in anticipation of the Monaco Grand Prix at the end of the month. He was frank in his candid comments.

“Vincenzo is a nice man. But he is no fun. He has no Sauna vibe. It’s too sad. He didn’t learn from Franco at all. Vincenzo really just has no style and a tremendous amount of anger. It must be a Sicilian thing,” commented Sagan, “He attacks his women like he attacks in races – too early and without enough stamina to last to the end.”

Rumor has it Nibali’s agent is attempting to work a deal with Team Sky for Nibal to transfer to the British super team.

“Nibali would probably be a very good fit with the proper, uptight, and superior Brits. Lord knows he’s struggled to fit into a passionate Mediterranean line up. Maybe he needs the regimented and inflexible routine of Team Sky,” declared his lawyer, Alex Carrera.

As per UCI contract rules, there won’t be any declaration of team changes until after the Tour de France in July.