Former Federation Internationale de l’Automobile president Max Mosley has thrown his hat in the UCI ring with his “Champions Circuit” bid, which has received endorsement from honorary UCI president Hein Verbruggen. This marks the second proposal Verbruggen has backed after he gave advice and support to Omega-Pharma-Quickstep owner Zdenek Bakala’s “Champions League” concept. 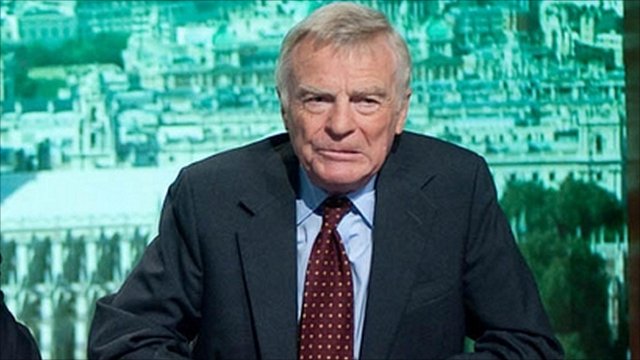 Mosley offers bid to the UCI to “improve the sport of cycling.” (photo courtesy of BBC News)

“My extensive experience in creating success at the FIA is well-documented. Since I’ve been ejected from the Formula 1 circuit based on misconstrued and alleged incidents during my reign there, I’ve decided to assist my good friends Pat McQuaid and Hein Verbruggen in pulling cycling out of its tailspin,” stated Mosley’s press release.

Mosley’s press release went on to point out that the sport lacked a “McLaren, Williams, and Tyrrell to prevent the UCI in their bid to globalise the sport and sign rights agreements on behalf of all stakeholders.” The F1 legend went on to describe that his  concept of a Champions Circuit would be a better move than Bakala’s “closed” proposal, which wouldn’t allow teams to move up and into the “elite tier” of cycling.

“The Champions Circuit would incorporate all the current races, guaranteeing five-year licences without a yearly review to cause instability. However, licence fees would double as trade-off for the stability. While Bakala is a dynamic businessman, he lacks sport governance experience to realise just how damaging his proposal would be for the sport. I will say his numbers for revenue-sharing for the teams are in line with what should have been occuring in Formula 1, as the teams there now take too great of a share away from FIA coffers,” continued Mosley’s press release.

When asked if his record in Formula 1 and the controversy surround his leadership would detract from his proposal, Mosley was candid.

“Look, I empathize with Pat and Hein. They’re going through a similar mutiny as I experienced when Ecclestone outplayed me for control of the sport. I see “Blame McQuaid” and “Blame Verbruggen” comments on Twitter similar to the signs demanding my removal at F1 races a few years ago. I think Pat and Hein are running their show exactly the same way I used to run mine. I think there’s nothing wrong with their governance. The parallels to my reign at the F1 upper echelon are identical, so if I can help them stay in power, I will,” concluded a defiant Mosley.

Pundits around the world were rather surprised to see Mosley come out and support Verbruggen and McQuaid.

“All I can say is, thank goodness we haven’t seen compromising snaps of Pat and Hein caught in twisted bondage games with dubious consorts so far. The timing of Mosely’s support is most unfortunate for the duo. Who’s next to support them? Donald Trump?” commented a pundit who may or may not have been Road.cc’s Simon McMichael.

The UCI refused to confirm or deny support for Mosley’s proposal, but Verbruggen himself acknowledged he was “honoured and flattered” to have Mosley’s support for maintaining control and dominance over cycling.