Today Michele Ferrari not only refuted the recent and substantial evidence against him, he also claimed that he didn’t even exist. Despite the pages of eyewitness testimony, as well as evidence of payments in excess of a million dollars from the now-disgraced Lance Armstrong, Ferrari still denies ever having doped – or having assisted in doping – any riders. He went on to add “But not only that, there actually is no Michele Ferrari, he’s merely a figment of your fevered imaginations, a rumour, if you will.”

Speaking in an interview with Al Jazeera’s Lee Wellings, the Italian once again repudiated the allegations against himself, Armstrong, and the matter of his very own  being. “I mean, have you ever seen him before? I know I certainly haven’t and I supposedly am him,” whereupon Michele half lifted himself from his chair and looked about, as if searching for someone before sitting down again and shrugging to the host, “I can’t see him, can you?” 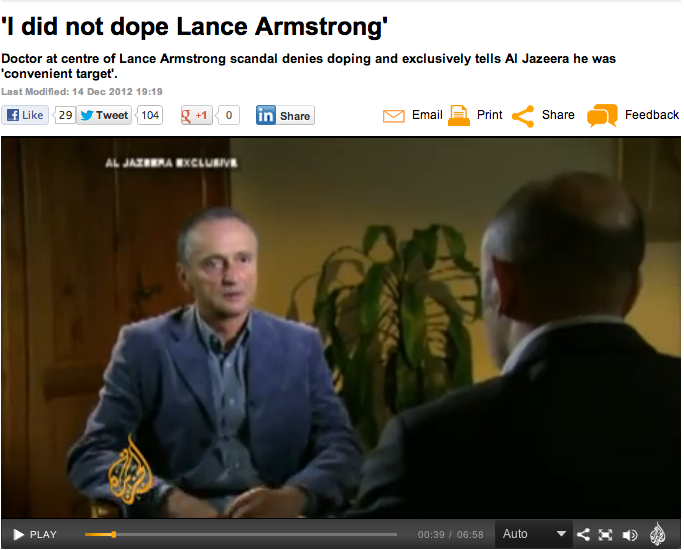 “I’ve never seen any doping practice from Lance Armstrong,” he said. “I can say I’ve never seen, I never heard something about that. He never asked me for information about doping, why would he ask someone pretend? Someone that’s not even real? Does Lance Armstrong exist? This whole story seems pretty shaky to me.”

“I know some people claimed that there is a guy called Michele Ferrari who goes around doping people but it’s a myth, just like the Boogey man or Santa Claus, it’s pure fantasy. We’ve all heard the stories about how you say his name three times in front of a mirror, then pay him a tenth of your salary so that later that season you fly up the mountains like a jet-propelled gazelle, but it’s an urban legend.”

“It’s all a bunch of scaremongering, I mean to say that someone would come along and inject you with magic substances that make you super strong and fast at riding a bicycle? People think THAT is a real thing? It’s preposterous, I have never even heard of this ‘E’ … ‘P’ … ‘O’ that you speak of, it’s unsubstantiated nonsense.”

“When I was growing up we were all told about how you shouldn’t take drugs and if someone asks you, you should ‘just say no’, but aren’t we all past that now? To talk about people doing such preposterous things is laughable, particularly the idea that they would do this to ride faster on a bicycle! I don’t even know what a bicycle is, I’ve never seen or heard of such a contraption in my entire life!”

“Are you saying that they ride these things in a ‘tour’ around the whole of some ‘country’ called ‘France’? Poppycock of the highest order I tell you! Balderdash! It’s smoke, mirrors and superstition the lot of it.”

“The more I think about it the more I’m certain that this is all just a stupid waste of my time. Is this even a real studio that I’m in?”

Then Michele laughed hysterically, got up and said, “I’m going to leave your Stuuudioo now” whilst holding his arms up and making air quote signs for the word ‘studio’. He then walked off whilst laughing maniacally and then muttered “Bicycle… ha!… it’s not even a thing… ‘France’? PAH!” and shaking his head.

Michele will be releasing a book entitled “The Dope Delusion” later this year.