Mercer breaks down the 2012 Giro presentation

The Giro d’Italia route presentation by RCS Sport on Sunday, October 16th, 2011 can be summarized in three words: rooster, scruff, and bald. 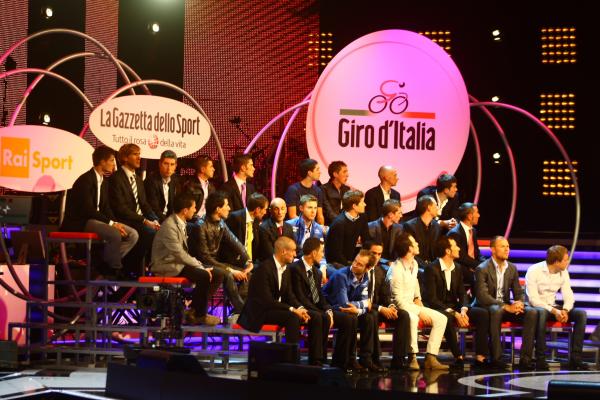 It should be noted that the three distinctive styles adopted by those at the presentation reflected, in some respects, the lack of originality in the cycling peloton. The group was revived, however, by a breath of fresh air in the guise of new Giro Director, Michele Aquarone, who adopted a simple but elegant ensemble punctuated by his gracious vocal style, which included a nod to his meteoric predecessor, Angelo Zomegnan.

Of the Rooster/Scruff/Bald stylings adorning the present members of the peloton, Jon Gadret and former Marco Pantani teammate Stefano Garzelli led the way with “bald.” While Garzelli’s style seemed less Romulan than normal, it was Gadret who took the prize for best bald, thankfully minus his typical smattering of facial piercings and his smouldering Nico-Roche-inspired angry face.

While the bald category may have been sparsely represented, several hundred entrants comprised the “rooster” category, duly noted by the RAI’s Alessandra de Stefano, who almost fell off the stage during the proceedings due to the massive contingent of preening cocks presented. One clear winner emerged in the form of CyclingNews‘ own Daniel Benson, whose style received a massive lift due to the presence Mario Cipollini a short distance away. The aura of Cipollini decidedly gave Benson the rooster category win, which he punctuated with his question – intelligently answered by fellow category member Jakob Fuglsang.

Presentation proceedings took a break with the requisite U2 “Beautiful Day” montage, duly noted by Daniel Friebe of ProCycling Magazine via his twitter feed, before the scruff category came onto the stage. Scruff finalists Thor Hushovd and Ivan Basso engaged in a duel for the coveted award, and unfortunately for Basso, his dramatically receding hairline was no match for the closely-cropped stubble skull look made famous by the Norwegian former world champion. Also of note was a lifetime achievement award handed out in the scruff category to Paolo Bettini, bringing many in the audience to tears.

Mafioso category contestants were strangely absent, no doubt intimidated by the presence of the aforementioned Cipollini.

Overall, the 2012 Giro d’Italia route presentation was one of the best in years, a promising harbinger of the race itself, commencing in Herning on May 5th, 2012.