In a rare and exclusive interview with Cyclismas reporter Frank Mercer, UCI President Pat McQuaid spoke candidly about the “cascade of successes” that have overflowed during his reign as the head honcho of cycling’s most important institution. Mercer spent the morning touring the Aigle-based UCI headquarters with McQuaid on his 24k-gold-trimmed golf cart. Following the tour, Frank Mercer conducted the interview while McQuaid tucked into his regular lunch – New Zealand Black Angus beef flown in that morning from Auckland, accompanied by a crusty potato galette made from rare La Bonnotte potatoes exclusively cultivated for the UCI kitchens on the island of Noirmoutier – a meal he claims to “enjoy thrice weekly.” 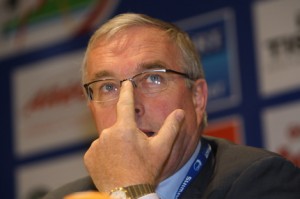 The Smartest Man in Cycling

Cyclismas: Thank you for the tour this morning of UCI world headquarters. It was enjoyable to see the work that you do here in Aigle. First question is two-pronged – what are your favorite parts of the complex here, from a personal perspective and also from a professional one?

You’re quite welcome. I’m very proud of our facilities here. We have nothing but the best of the best, from the materials used in the construction and finishings to the exquisite handmade furniture. The Swiss have impeccable taste. As far as favourite parts? I’d have to say on a personal level I’m rather fond of our wine cellar – I believe the collection is now valued at well over 2 million Swiss francs, and contains, in addition to the rare vintages, some of my favourite spirits. Of note are a few bottles of exclusive Nun’s Island whiskey. I’ll crack that for special occasions, like when we grant [uses air quotes] “victories” to the AIGCP. On a professional level, I quite enjoy the spaciousness of my office. It certainly is my home away from home.”

Cyclismas:  Okay, so let’s get right into this then. You mention [mimicking McQuaid’s air quotes] “victories” being conceded to the AIGCP. What do you mean by that?

Look, it’s painfully obvious.  We never really cared about the race radio business. Not at all. Pure rubbish. But certain riders and team owners were so whipped up over it, Hein thought it might be a good way to ensure control over the peloton. Take a look at the fact that after we took it away, and they did their little temper tantrum walk-out business, the end result was that they still went to China. We just wanted to make sure they were present in Beijing.”

Cyclismas: But why Beijing? Why the importance on that particular race?

Have you been a cave for ten months, boy?  Hein [Verbruggen] has a personal interest in Beijing. He ran the organizing committee, and he’s a smart businessman. There is only so much money in the first world nations, and everyone is fighting for a slice of a that golden pie. The only growth areas are in the so-called BRICS countries of Brazil, Russia, India, China and South Africa. With Hein’s connections in Beijing, China is an easy one for us. With the addition of Makarov to the managment committee, we have Russia in our pocket.  Two for starters is good. Anything else from the other fooking countries is icing on the cake.”

Cyclismas: What about developing races in cycling-mad areas like the United States and Europe, capitalizing on the large fan base?

To paraphrase Jonathan Vaughters from twitter earlier this week, who wants to race over shite northern European farms and stay in shite Belgian hotels? Obviously he doesn’t. As far as America, they’re all fooking broke and their current anti-corporate President is seemingly enjoying this daft Occupy-Everywhere shite. I mean really, you should be thankful Wall Street is around, otherwise you’d be shoveling horse manure instead of tweeting on your fooking eyepad or whatever it’s called.” 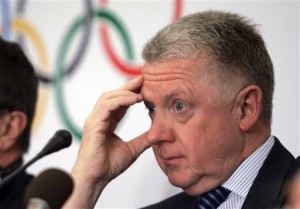 Cyclismas: You mentioned Hein’s personal interests in Beijing. Care to expand on what you mean there?

Well let’s see, Henricus owns a TV production company that handles some major contracts – it did the on-ground TV work for the Tour of Beijing [Ed. note: You can see the company information here]. He also has his SportAccord shell company doing massive sports projects in Beijing like the World Combat Games, and he’s pretty much friends with the politicos that did the Beijing Olympic Games. We’ve leveraged that relationship to provide an excellent cash return to our pockets.”

Cyclismas: Speaking of your own pockets, what’s with the controversy surrounding taking money from the UCI to start a for-profit corporation that has UCI insiders as shareholders rather than the UCI itself, like the FIFA model?

I’m a firm believer in trickle-down economics. Your President Reagan was right. The money we collect will find its way back into the economy based on our purchases of luxury goods for our various holdings the world over. FIFA missed the boat on lining their own pockets. I mean, really, collecting a “salary” when you can have the entire net profit? They’re too old school and still hold onto some archaic principles. Stupid fookers.”

Cyclismas: So using blackmail tactics to ensure your pockets are lined is also fair game?

Hey now, it’s not blackmail if the other stupid fooker starts it.  We’re just protecting our interests from an obvious threat to our little mafia game. We’ll just fight fire with fire, and usually no one does anything about it, because they’re all just a bunch of stupid fooking sheep. I mean, no one really gives a rats arse. If they did, wouldn’t you think that someone would have stood up by now besides that sideburned fop of a crusader?”

Cyclismas: Moving along, you’re up for election this year.

Well it’s not really an election, per se. It’s more of a coronation.”

We had the 42 handpicked UCI Congress members cast a secret ballot that we’ll be divulging in detail sometime around February.”

Cyclismas: And what was the voting about? Can you share details with the readership today?

Well, since no one reads your shite little rag anyhow except L’Equipe, I guess I can share that we’ve passed a motion that installs me as President for Life.”

Cyclismas: Wow. Congratulations. How did you accomplish that?

It’s easy when you buy off and install a Congress that votes on UCI business. I just convinced each one individually that this is what’s best for the sport.”

Cyclismas: Isn’t this counter to the mission of the UCI? Isn’t the current world climate rather against this sort of event?

Thank goodness that cyclists don’t read too well, and they’re a little fooking stupid, and definitely spineless. So I don’t think that constituency reflects the rest of the world. I mean, cycling politics is still [uses air quotes] “the old boys club.” We even got rid of the one woman troublemaker who just didn’t get the fooking program a few years back. Thank Christ the ethics committee understands what is right and just, otherwise we might have had a flap over that business.”

Who? I don’t know what you’re talking about [winks with both eyes, while laughing].

I’d like to say thank you to the entire world of cycling for persisting with a passive mentality that has allowed a closed circle of well-connected insiders the ability to raid the cookie jar at liberty. Couldn’t happen in any other sport.”