Representatives of Mavic met with their legal counsel Wednesday after further reports linking Dr. Michele Ferrari to Lance Armstrong have made the potential indictment of the former champion a foregone conclusion. 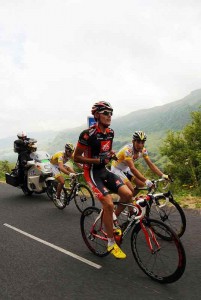 Mavic’s stocks have taken a huge hit based on Armstrong’s declining popularity. Their main line of shoes, including the Huez and Zxellium Ultimate, have the trademark yellow hue as its blinding brand call sign. Mavic also recently introduced a new helmet line, aptly named Plasma, which includes its trademark yellow as the primary color.

Numerous members of the professional peloton, who wish to remain anonymous, have dropped their sponsorship deals with Mavic due to the current stigma of yellow  in the ranks of the peloton. One rider confirmed that he’d been called a “Lance Lover” for sporting his yellow Huez shoes during the recent Vuelta Espana.

“I was forced to switch to some black Sidis due to the constant bullying. I couldn’t take it anymore,” commented the anonymous rider.

Another rider had asked his soigneur to “… spray paint that yellow puke a different colour. Maybe a bright pink.”

When asked about the potential for a class action lawsuit against Armstrong for defamation of yellow, Svegsson noted that the ASO, Sponge Bob Square Pants, Big Bird and Coldplay had all indicated their interest in joining.

“We will be exploring all of our options to retain an untainted yellow for the entire world,” concluded Svegsson.