After a roller-coaster UCI management committee meeting which saw fists flying and insults of every kind hurled from all sides of the table, including from the normally mild-mannered Middle Eastern contingent, Itera tycoon Igor Makarov’s offer to purchase UCI headquarters was ratified in an 11-2 vote. 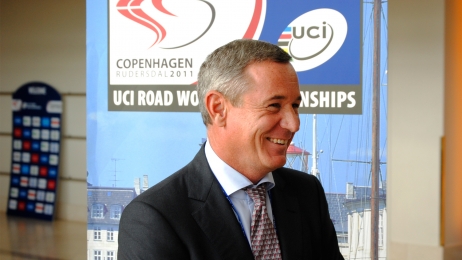 Makarov in happier times at the UCI championships in Copenhagen. The billionaire’s financing of UCI headquarters will save the embattled sport governing body

“This is a momentous day in the history of cycling. We have secured the long-term financial viability of this sport of two-wheels with the sale of UCI headquarters to one of the best, most finest human beings on the planet, Igor Makarov. His selfless interest in cycling is well documented, and we are happy to have completed this deal,” stated UCI vice-president Renato di Rocco.

The deal was crucial for the UCI, as soon-to-be former president Pat McQuaid had expended the entire UCI reserve fund, along with the remaining funds in the ProTour reserve fund in his bid to create a smokescreen to distract the cycling public from the legacy of corruption, cronyism, and nepotism that marked his reign and that of his best friend forever Hein Verbruggen.  McQuaid had reached out to several Swiss banks in a bid to mortgage the montrosity known as UCI Headquarters in Aigle, but after his desperate letter to the IOC begging for help, the Swiss banking circuit declined to assist.

“It was really dire times. Our main partners were refusing to pay their sponsorship dollars, which made it difficult for the team in Aigle to keep the lights on. In fact, the electricity the headquarters was consuming while trying to battle the entire world caused the Swiss energy commission to demand a reduction in consumption, or the UCI would have to pay for a new hydrodam to be constructed,” stated di Rocco.

“Since McQuaid and Verbruggen had been handing out six figure salaries like drunken Enron executives, our overhead is astronomical. If we hadn’t put the Makarov deal together, I have no idea how we would have met payroll in March,” commented Barrio.

The Makarov deal will have no direct impact on the day-to-day operation of the UCI. Rumors of Makarov moving into the office space next to the UCI presidential office, formerly known as “Verbruggen’s dirty lair,” have not been confirmed as of press time. However, the resignation of Pat McQuaid was one of the key points in the transaction.

“While Igor was demanding Pat to stand down immediately, especially after the Katusha debacle that was completely mishandled by the existing power structure, we were able to receive a concession of Pat retiring when his existing term is up,” stated a representative from Ernst & Young, the organisation handling the transaction on behalf of both parties.

Pundit reaction around the cycling world was mixed.

“So does this mean Makarov will be the next UCI president? This has been the pattern for the last 25 years. Cycling seems to kiss the arse of the money men in the sport. I’m hoping we’ll have a change, and maybe Tracey Gaudry might show all these old cronies how to run an organisation properly,” stated a journalist who may or may not have been Rupert Guinness.

“I’m not sure what the fuck I’m going to do. I banked my whole career on the Verbruggen/McQuaid/Armstrong money train. I mean, I’m too old to start over, and I haven’t been wise with the money they all threw at me. What’s a middle-aged, bald, and slightly plum photographer going to do now?” stated favored UCI suck-up Graham Watson.

The financing deal is set to take effect March 1st, with the funds paid out monthly via a structured 10-year program, since Makarov has concerns about UCI bureaucratics burning through on the dough in the first month.