UCI Management Committee Member/Russian Cycling Federation President/Team Katusha Owner/Itera Owner and coffee-achiever Igor Makarov today announced a new trainer for his Katusha professional cycling team. This announcement comes hot on the heels of the appointment of Hans-Michael Holczer as the new Katusha General Manager, in replacement of Andrei Tchmil due to his recent promotion to the presidency of the European Cycling Union. 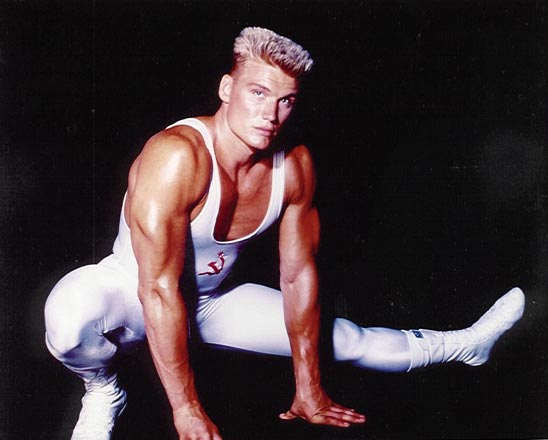 “We anticipated Tchmil to have a heavier workload with the weight of the presidency on his shoulders, and most likely he will not have as much time to look out for the charges in his platoon,” commented Makarov. “As a result, we needed to find a worthy partner to assist in the day-to-day training and conditioning of the boys – someone capable of implementing Holczer’s mission for our Global Russian Cycling Project.”

Based solely on his performance in Rocky III, Dolph Lundgren is Makarov’s rather surprising pick, considering the towering actor’s cycling background consists of commuting around the block of his Los Angeles home. “I spent several months reviewing resumes and screening films, and had many long lunches with potential candidates,” justified Makarov. He continued, “Lundgren represents the pure Russian ideal of athleticism combined with proven scientific methods. He inspired a generation of Russian athletes with his spectacular muscle composition, beautiful girlfriend, and ten thrilling rounds with Sylvester Stallone.” When it was pointed out that Lundgren was, in fact, a Swede by birth, Makarov quickly made a phone call to his good friend, Vladimir Putin, to have Lundgren granted Russian citizenship.

Makarov then outlined his plan for “Mother Russia Cycling,” inspired by a recent screening of Lundgren’s turn in the Expendables. Lundgren’s new role will not only be as head trainer to the Katusha team, but also to train the Russian squad for the World Championships. To make things easier for the new manager and new trainer, Makarov named the squad strictly from his professional team’s roster. “I felt it was easier that way to remember the names and their required concoctions for next week’s victory lap,” said Makarov.

When told that Lundgren’s character lost at the end of Rocky III and was a traitorous double agent in the Expendables, he appeared somewhat surprised, as according to Makarov both characters came out victorious in the Russian releases of the films. Makarov clarified, “That must be the result of western jealousy and revisionist history. I know in my heart who the true victors are.”

Cyclismas was informed that former manager Tchmil plans to observe day-to-day activities via remote links, utilizing currently unused KGB spy satellites still in orbit until he feels comfortable that both Holczer and Lundgren have a handle on the “Katusha Sports Science Program.”

We concluded our interview with a tour of Makarov’s office in the Kremlin, where he showed off his newest desk, a faithful replica of a Louis XV Bureau du Roi with solid gold trim in lieu of the traditional brass. “Quite nice, isn’t it? I especially like the genuine gold accents and the diamond encrusted edges,” added Makarov. “Due to the volume of paperwork between all of my important positions, I thought an important desk was in order.”