Litigants and the UCI: Just the beginning?

After decades of bullying and intimidation by the UCI, have we started to see the shift? Are those who have been “oppressed” during that time starting to remove and wave the decrepitly stench-riddled UCI shoes Pat McQuaid/Hein Verbruggen previously planted up everyone’s arses? 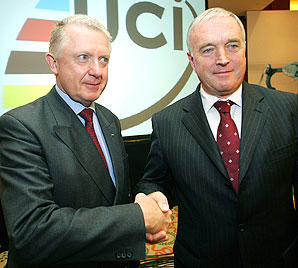 Pat McQuaid and Hein Verbruggen have been accused of protecting Lance Armstrong while he doped.
FRANCK FIFE/Getty Images

It would seem so.

Paul Kimmage will go down as the first to stand up against McQuaid and Verbruggen in a court setting, fighting fire with fire. Yes, former WADA president Dick Pound rattled his sabre in retaliation when the duo did the same to him, but he didn’t duke it out within the parameters of the legal system. Neither did Sylvia Schenk during her battle over the alleged “bribery” allegations back in 2005. No, Kimmage was the one who took up the challenge when a legion of supporters started emptying their wallets and effectively indicting the two individuals at the top of the food chain for their behaviour.

What has followed could be cycling’s equivalent of the Berlin Wall falling. Kimmage’s decision to take on the two Mandarins who’ve long presided over the “Cycling Bubble” have emboldened others to take their own legal steps – no matter how ludicrous they are perceived – to send a message to the UCI that their actions will not be forgotten or washed away.

Just as many in government and Wall Street are now being held accountable for their part in the real estate bubbles in various countries around the world, so should Verbruggen and McQuaid be held accountable. Both men artificially propped up cycling by first using Armstrong as the “derivative” for revenue generation, and after Contador’s refusal to play ball with the UCI on their turf, they have used Bradley Wiggins to the same effect.  Many pundits are noting the mass exodus away from the sport after Armstrong’s villification, as they turn their gaze back to more North-American-style sports. If some of the unfortunate press reports of Wiggins and his tax dodging are any indication, the talented cyclist could be another casualty of the British Cycling “derivative” scheme. I digress.

Kimmage has led the way for all in the sport to examine their legal options to be made “whole.” SKINS is the latest to step into the legal queue, announcing their intention to sue the UCI for damages to the tune of two million. The SKINS lawsuit, as @inrng noted Monday, can be construed many ways – from a publicity stunt, to a cash grab for a “failing” brand – as many have argued on Twitter. I disagree. SKINS has stated their love for the sport, their passion for the sport, and they are willing to put themselves on the line for the greater good of the sport, which could have a more damaging impact on their brand than a positive one. After all, the SKINS president sent an impassioned open letter to Pat McQuaid a month ago, which indicates their lawsuit isn’t out of blue or a shift in their overall philosophy.

No, what SKINS and Kimmage have done is trigger a new pattern of thinking, a new manner to respond to the years of repression at the hands of the UCI’s shite-stained shoes.  Why not use the legal system against the duo who have used it themselves to bully, intimidate, and excommunicate anyone who voiced dissension or opposition as to how they’ve lorded over cycling? McQuaid and Verbruggen freely used the UCI coffers for their own financial gain, why not cause them to dip into their pockets for a change to defend their actions in a court of law?

As David Millar stated in his interview via the Guardian Monday,

“Pat has to show volition to change the UCI. I’ve said to him before that the first step is to show complete recognition of the past and assume responsibility for it. But, with the UCI, there still seems to be a sense of denial and an ‘us and them’ approach. They still claim that they did everything they could to stop doping. Well, they didn’t – that’s obvious to everyone.

Millar and many others recognise the UCI didn’t do what they were supposed to do, and when those in power refuse to do what is right based upon our current circumstances, the only way to force the situation is through civil lawsuits and requests for criminal investigations. So while some deride both SKINS and Kimmage for their actions, what else can we do when faced with a leadership that fails to take responsibility for their actions in the “Great Cycling Derivative Bubble” Scandal?

In fact, I firmly believe the trial trail blazed by both Paul Kimmage and Jaimie Fuller is merely the tip of the iceberg. We can expect national federations looking at civil suits. We can expect more sponsors filing civil suits. And perhaps most importantly of all, can we expect the professional peloton to sue the UCI for creating an unsafe working environment for said peloton by turning a blind eye at best or protecting Armstrong and his ilk at worst? If any group has the best case for a lawsuit against the UCI, it is the professional peloton for what they have endured since the 90s. How many riders died trying to keep pace with the peloton? How many have damaged health because of the UCI’s actions? 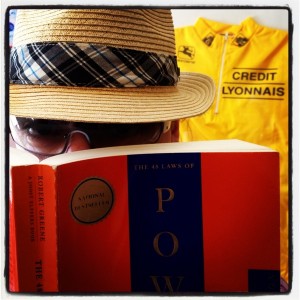 The pro peloton is the victim in all of this. The Armstrong evidence shows the gut-wrenching decisions many cyclists faced. Graeme Obree himself recounted an interaction with an Italian professional when he joined Le Groupement, as he recounted to Scotland on Sunday, where the rider he referenced scoffed at Obree’s lack of “professionalism” by not doping. Imagine the pressure during the 90s that new riders faced entering the professional ranks where “99 percent” of the peloton doped. With the evidence compiled against Armstrong (including a dodgy passport in 2009 and 2010), and the amount of high-profile riders tainted with doping even today, we still have a significant problem. There is still substantial risk for riders and their health in 2012.

People can make all sorts of excuses on behalf of the UCI and place the blame back on the riders, or the team owners, or the doctors, or the sponsors. The bottom line? The UCI allowed it all to happen. They took control of professional cycling. They created the WorldTour. They became directly involved with professional cycling in every aspect from anti-doping, to contracts, to team licensing. They are the ones to set the tone and the parameters around the operation of the sport. They are, therefore, ultimately responsible. They did the crimes, now it’s their turn to “do the time.”

It’s high time everyone held them accountable for their past transgressions by taking full advantage the legal system. It’s time to break up the “chum-ocracy.” It’s time for a new pair of shoes.