Lance Armstrong declared his intentions for “Comeback 3.0″ after what he described as a “disappointing conclusion” to his Xterra World Championships performance today in Maui, despite the fact that any other mere mortal would have been thrilled with the result. 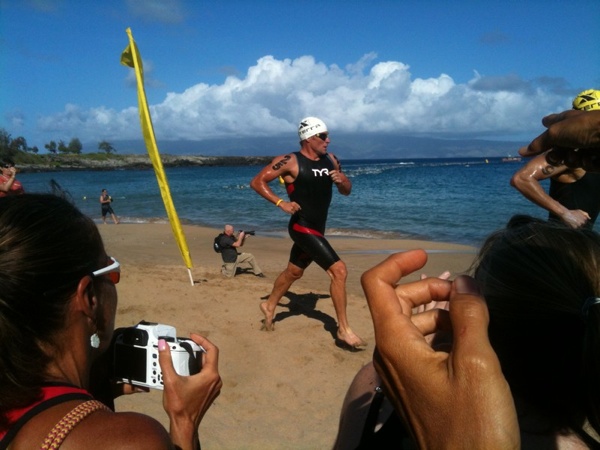 “I’ve let the entire cancer community down with another in a string of non-winning performance in the past 18 months. The Livestrong community expects me to win at every event I enter, which hasn’t happened for quite some time,” relayed a sullen Armstrong.

Armstrong’s 23rd place overshadowed a phenomenal performance by Austrian Michael Weiss, who was the actual winner of the event. The jublilant Austrian’s press conference, however, was interrupted by Armstrong’s bellows of comeback 3.0 at the back of the room, swaying the press corps’ attention away from the victor.

“After a few seconds of deliberation, it is my intention to return to the sport of professional cycling. I have already spoken with my mentor, Johan Bruyneel, who is welcoming me with open arms to his new team that was to be led by the Schleck Brothers. I look forward to potentially helping, or inspiring, or torpedoing, their efforts to win a Tour, depending on whatever I feel like doing at the time,” declared a stubborn Armstrong.

When asked about his present physical condition, which some noted as bearing a remarkable resemblance to Jan Ullrich’s current physique, Armstrong responded by shoving the reporter against the chain link fence encircling the finish zone.

“That’s bullshit. I’m not going out like that asshole riding retirement ‘fundos’ in Miami – I’m hanging onto fierce competition with the only f**king deathgrip I know how, so f**k off,” responded Armstrong to the query.

Johan Bruyneel – who spent two days on planes just to be by Armstrong’s side in Hawaii for the announcement – was beaming from ear to ear.

“I am welcoming the only family I have back into the fold, doing the only thing I know how to do, to raise the Lance banner one more time in Paris. And no this isn’t about trying to hide an embarrassing tri finish for the best athlete ever to grace the planet,” stated Bruyneel.

When asked about the reaction of the Schlecks to the announcement, Bruyneel was candid. “I’ve never told any rider other than Lance about anything that happens within a team, so why should I start now? Mark my words, Lance will be on the podium in Paris.”

The Schleck brothers could not be reached for comment due to their shopping excursion in Monaco, looking for an appropriate congratulatory baby gift for Mark Cavendish and Peta Todd.