Lance Armstrong confesses “I did it for the alimony”

Cyclismas scribe Frank Mercer had the opportunity to share some sushi at Aspen’s famed Matsuhisa with the embattled Lance Armstrong just days after his decision to walk away from arbitration with USADA, and by default losing his seven Tour de France titles. 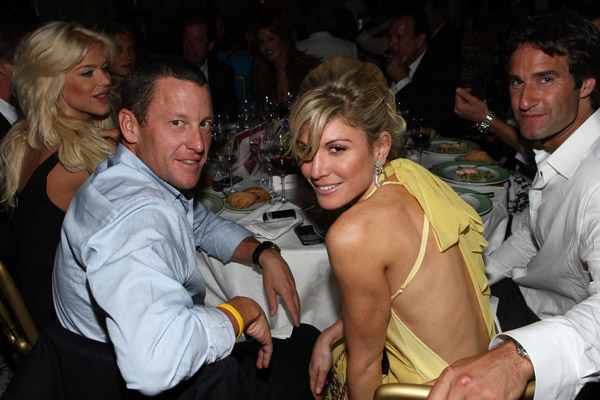 Cyclismas Let’s start at the beginning. How did you get into doping?

Lance I have never tested positive. I’m walking away from this f**king witch-hunt.

Cyclismas Does this mean you’re having trouble coming to terms with the fact that you’ve been outplayed and outmaneuvered for the first time in your career?

Lance I have none at the current time because f**king Messick doesn’t have a backbone. If it wasn’t for Johnson and the other guys at USA Cycling, I’d be totally screwed. What’s wrong with people these days? Don’t they like the win-at-all-costs mentality? Don’t people like winners anymore? Cycling’s full of losers. I know. I kicked their asses when I came out of retirement to podium in Paris.

Cyclismas Let’s delve into that subject. Why did you come back from retirement? Your return is being discussed as your Achilles heel, opening the door for USADA to move against you.

Cyclismas That would be nice for a change.

Lance Hang on. (dials cellular phone) Hi Mark? Can I spill the beans on why I came out of retirement? Is there any damage to the titles if I share the truth? Yes. Yes. Yes. No. No. He didn’t ask about that yet. It’s fine? Alright. I’ll go for it. (hangs up phone)

Cyclismas So you can tell us the truth on that one?

Lance Yes. I did it for the alimony.

Cyclismas Sorry? Alimony? Can you elaborate?

Lance Sure what the hell. All my ex-girlfriends receive a monthly payment in exchange for their signing of a non-disclosure agreement for keeping my activities private and quiet. I also make substantial payments to Kik for the kids and her lifestyle, not to mention taking care of my kids with Anna. Plus, I just can’t help but have extra helpings, if you know what I mean. Seriously, the number of blondies in Colorado for the US Pro is off the hook. The boys have done some good scouting for me the past two weeks.

Cyclismas So, you’re saying that due to the heavy financial burden of your personal decisions, you were experiencing trouble making all your payments?

Lance Hey now, I always make my payments. Well, to those I like… HA! Seriously though, it was getting a bit thin. I mean, when I retired, people started forgetting about me a bit, so I had to do these appearances at various cancer events, but it wasn’t the same as competition. I couldn’t slam dunk a granny for not keeping my wheel, you know? So when Johan [Bruyneel] and Lee [Applbaum] threw 25 million at me to come back, I thought, hey, well, that’ll solve some of the alimony problems.

Cyclismas Is this why “Big Yellow One” was grounded?

Lance Well, yeah, it was getting kind of tough, and Ulman is my conscience, and he said maybe it wasn’t a good thing to keep the jet flying when so many people in America couldn’t afford their houses and food, so I thought, yeah, it might be good PR for me to fly first class instead. Plus, I had that huge water bill in Austin! Wow, that was a shocker. Got rid of the ranch over that.

Cyclismas So what’s next for Lance?

Lance Well, I need to keep those paychecks coming, or the non-disclosure agreements are null and void. And that could be a big problem. Especially since I pissed one of the girls off, apparently, and she’s already talked to Tygart and those witch-hunters. I think me and Johan are just going to do the Breakaway League without Vaughters. Traitor.

Cyclismas What about all those riders who are still supporting you?

Lance Good thing most of them aren’t too bright. Gives me some breathing room. Plus, I have a year before the UCI implodes, so by then the Livestrong Breakaway Series will be up and running.  Glad I’ve got guys like Chris Horner and Hayden Roulsten in my corner. PT Barnum was right, huh?

Cyclismas “Sucker born every minute,” true. So you’ve got a Breakaway Cycling League, and still many endorsements. The question is are you happy with how your life has turned out?

Lance Dude, I’m stoked. I’ve got houses everywhere, and more money than 99% of America. People keep giving me money, and I don’t give them anything back other than “hope” or “awareness” or “air quotes.” They are all still my yellow army. It’s pretty cool. And McDreamy says I can get a walk-on in his next movie, so I’m looking forward to that.  So, yeah, I’m really happy with how my life turned out. Rich, famous, and babes galore. What more do you need?

Cyclismas That’s the question Lance, how much more do you need?

Lance I’m like Weisel, man. I want it all. Blondes in saunas. Blondes in pools, blondes on the table. And maybe a little other action once in awhile.

Cyclismas Thanks for your time, Lance.

Lance Dude, try that sushi there. It’s like 100 bucks a roll. And try that puffer fish thingy. It’s a gooder. Makes you feel like Zeus, baby.