L’Affaire d’Armstrong and the fallout

The work of the United States Anti-Doping Agency on behalf of cycling and sport in general was revealed Wenesday in staggering detail. The organisation became the first anti-doping agency ever to demonstrate complete transparency in an investigation by releasing their 202-page Reasoned Decision and all its supporting evidence – in full, online, viewable and downloadable to the entire world.

The depth, the breadth, and the method by which the information was released was revolutionary and unparalleled. Not only did the UCI, WADA, WTA and other organisations with vested interests have an opportunity to immediately read all the supporting documents, but the general public as well has also been allowed to “look behind the curtain” unlike at any other time in the past.

We’ve also witnessed the chaotic ramblings of several individual who refuse to let go of the Armstrong mythology in spite of the avalanche of evidence. Nike. Sean Yates. Lance himself. Trek and Oakley at the time of this writing are still on the fence, which is itself a rather sad statement of their business affairs.

We’ve also seen the UCI themselves attempting to spin themselves out of their responsibility, beginning with Hein Verbruggen stating “And I never said that Armstrong never doped.”  However it’s pretty hard to deny the following comments he made to ad.nl in May of 2011, as reported by cyclingnews.com, where he said:

That’s impossible, because there is nothing. I repeat again: Lance Armstrong has never used doping. Never, never, never. And I say this not because I am a friend of his, because that is not true. I say it because I’m sure. Even if we would like, it would not be possible to bury a positive test. Test results are not only to the UCI, but also to the WADA. So once and for all: under my chairmanship have such practices never occurred at the UCI.

Unfortunately, with Pat McQuaid and Hein Verbruggen in charge of things, it will be another missed opportunity. 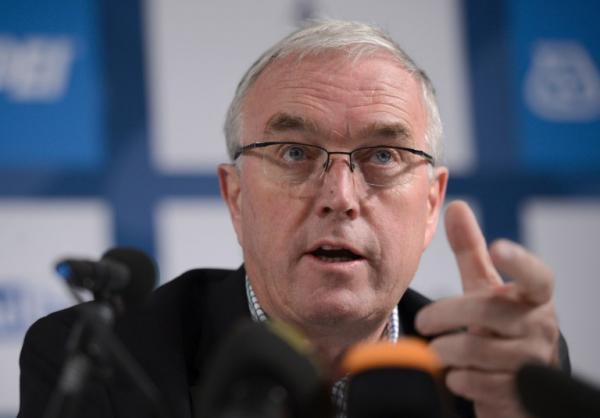 What will McQuaid’s legacy be? (photo courtesy AFP via cyclingnews.com)

The pattern has worked so many times for both of them, and for the complicit management committee. Deny, deny, deny. Make strong statements. Strategically sue those who are attempting to “distort” their message. Bully the press into submission by threatening to blacklist. Offer up a few sacrificial lambs. Back to business as usual. Since it’s been so successful for them in the past, why won’t it work now? Why is the zebra now changing its stripes?

The trouble is that Hein and Pat have become analog gangsters in a digital era. Information is shared around the globe instantaneously via Twitter, Facebook, and the vast network of bloggers who have dedicated themselves to cycling. It’s a fact that this vast network has helped the confidence of many key cycling journalists push onward with the truth. The dons of cycling’s mafia can no longer control the message the same way they used to. In point of fact, this is what Armstrong is also currently experiencing, in spite of the fact that he has an extensive digital team attempting to stem the tide.

As a colleague of mine noted in a conversation yesterday, the ability to hide and conceal illegal activities is becoming harder and harder as investigative methods become more and more cost effective and technologically advanced.  Let us remember that WADA has been playing catch-up since their inception, but because of their use of technology, they have caught up with lightning efficiency and speed (still not enough, but it’s getting better). Cycling truly was, as David Howman characterised in an interview with Benson on Thursday, the “Wild West” when it came to rampant doping in the peloton. It was the norm, rather than the exception.

The irony in all of this? McQuaid sits on the WADA executive committee. That’s right. The man who exchanged blows with USADA and its jurisdiction and almost came to blows with WADA over the Armstrong business sits in on all the important meetings the organisation holds. And yet, he insists on his bitter and confrontational battle against the organisation, and the national  anti-doping agencies that purport to do battle against the cheats.

Is McQuaid’s participation with WADA merely to keep tabs on what the organisation does in the name of anti-doping? Is it a way for him to figure out ways in which he and Verbruggen can personally profit at the sport’s expense? It’s rather a sad irony that an individual who has been so adversarial is allowed to participate in the highest level of decision-making process, that the president of an organisation which waited until the eve of the 2004 Olympics to ratify the WADA code is part of the UCI’s operating procedures.

Based on these few points alone, we are far from the end of rooting out doping and the corruption that surrounds the activities of doping. When it takes the news of one thousand pending pages of documentation for Team Sky to “dismiss” a suspect doctor, but yet still employs a directeur sportif who became part of the supporting evidence owing to his connections with an alleged transporter of doping products, we still have a long way to go. When in spite of the mounting evidence supporting a management committee’s complete ineffectiveness to combat doping problems, they continue to preside over the sport, we have a long way to go.

We need to remember the UCI has nothing to do with the positive steps that have transpired recently. It was the work of national federations, national investigative agencies, an international anti-doping agency, and the willingness of witnesses to come forward that has created the path towards a clean sport. In fact, when Jörg Jaksche came forward to McQuaid himself, nothing was done. Nothing. Ever. Jaksche didn’t see the light of day beyond the Freiburg investigation until his name appeared in the Armstrong debacle. This was a man more than willing to participate, yet he was ostracized by the very organisation that was supposed to protect him.

Instead, cycling’s leaders are taking their 21 days to determine their course of action. The UCI touted their “fight against doping” and touted their “biological passport programme,” yet the tide of doping continued. Doping didn’t stop for everyone in 2006 and 2007, as we might be led to believe by the admissions of Leipheimer, Danielson, Vande Velde, Barry, and Hincapie. Who were some of the highlights the past four years? Bernard Kohl. Davide Rebellin. Riccardo Ricco. Stefan Schumacher. Ezequiel Mosquera.  Danilo di Luca.

Armstrong’s fall returns us to square one. It’s up to all of us to ensure we don’t pedal backwards like we did in 1998 and 2006. No more dodgy doctors. No more dubious directeur sportifs. No more “kind of” statements against the cheats.

We all need to walk the walk.