Remember the Association of Female Cyclists? It was formed back in November after the women’s peloton broke off from the UCI. It took a few months for the organization to get up and running, as the organization’s new director, Patty McQuinn, got stuck in some particularly sticky Belgian mud during ‘cross season. However, having given up on being a crossover soigneur-to-CX star, McQuinn is now firmly at the helm of the new, softer version of the UCI. 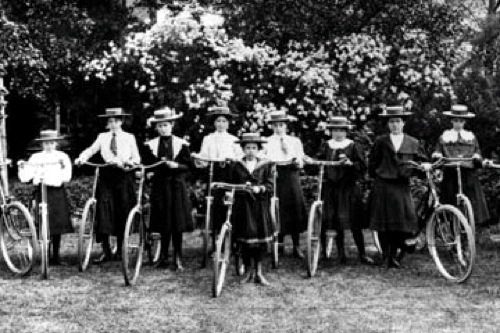 According to an interview with McQuinn last week, “The AFC is now running just fine on daises and chocolates, as promised, and we are looking forward to the upcoming season.” Unfortunately, some of the bigger promises made by the organization’s founders, such as minimum salary requirements for all female riders, seem stuck with McQuinn’s old CX Sidi’s in Bruges. A spokesperson for the new organization — an anonymous Twitter account called @VeloHoHo — announced today that some changes will have to be made to the structure of the organization due to insufficient funding.

It is not yet clear what exactly the changes will be, as @VeloHoHo spent the morning jumping back and forth between tweeting the organization’s news, taunting @JohanBruyneel, and exchanging “Women’s cycling rules!” tweets with @Vanderkitten.

What is clear is that the minimum salary requirement is teetering on the edge of unsalvageable. According to @VeloHoHo’s furious tweeting, the $20,000 per year minimum will be instituted for every team except the once-mighty Solyndra2030. The team’s title sponsor announced last week it could not meet its financial obligations (something to do with Lance Armstrong forcing the CEO to mismanage his energy business). However, the company is still committed to seeing its name on every race through the end of its contract. As the AFC no longer have sufficient funding to remake its marketing materials without Solyndra, they have decided to honor the company’s wishes — at least until they successfully petition the EU for bailout money.

Furthermore, the Solyndra team will continue to function under a Women’s World Tour license, as the AFC is somewhat dependent on the well-connected director of the team, who has made it clear that she will enslave her riders before disbanding the team. She later backtracked and said she didn’t actually want to force her riders into slavery. “I meant more like indentured servitude,” she said.

The League has decided to overlook unpaid salary minimums for that Solyndra’s riders, believing that the women are better off living on ClifBars than finding themselves unemployed in January (it was also mentioned behind closed doors that it might not look good for the new league to appear to kick some of its top talent to the curb in its first month). A Solyndra rider who asked not to be identified dismissed the controversy, noting the money had not dried up yet. “My salary has been cut since last year, but I still probably get paid more than a cycling journalist,” she added dryly.

La Pélotone is a Cyclismas column dedicated to Shane Ferro’s not-so-serious daydreams about a world that takes women’s cycling seriously. You can follow her on Twitter @shaneferro.