Kim Jong Un speaks out in support of the UCI

In week that saw attention turn away from Lance Armstrong’s massive fraud at the expense of professional cycling and cyclists everywhere, and  towards an embattled UCI, North Korean dictator Kim Jong Un spoke out in support of the Aigle-based organization. 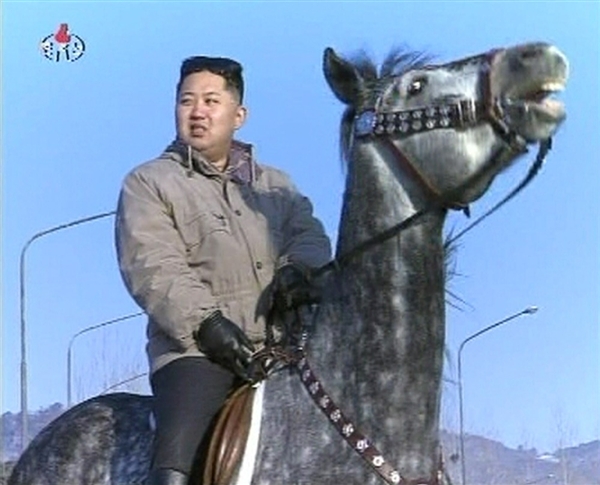 In a video interview released by North Korean television, the current supreme leader of the totalitarian-ruled nation had words of encouragement.

“Freedom is humanity’s great lie. Humanity was meant to be repressed, subjugated  controlled, mocked, and abused.  This has been our policy for many, many decades. The people of North Korea belong to the state. We do with them as we wish. They are cattle who will receive punishment for challenging my divine right to rule them with an iron fist. I have gladness to see another regime adopt a similar attitude. It gives me hope for sport. I am happy to see the UCI attempt to flex their repressive muscles to gain control of cycling,” declared Jong Un.

Jong Un went on to identify the behavior which gave him “hope” for cycling.

“Pat McQuaid, while supporting our neighbors to the south with UCI-sanctioned races, has shown his true alignment with our culture. Calling those who oppose his power ‘scumbags.’ Attacking those in his sport who break ranks from the UCI party line. Silencing his critics with legal wars.  McQuaid’s long-held dream of world cycling dominance over all other sports justifies his actions. The ends always justifies the means when we achieve our goals. It is with honor. It is how my regime acts today,” continued Jong Un.

The UCI, after taking a beating the past five days in the press, was thrilled to have the support of anyone, even if it was a North Korean dictator.

“Finally, someone understands where I am coming from. I have the best intentions to make the cycling nation the strongest, most powerful, and best-funded sport on the planet. But this is not enough. I want to control cycling throughout the galaxy, throughout the universe. It is my divine right handed down by Hein Verbruggen himself to rule the sport with an iron fist. To crush those who oppose my dreams of a world filled with nothing but bicycles, and to declare war on all other forms of transportation and sport,” frothed McQuaid.

When asked if corruption, collusion, cronyism, and general bad behavior were excusable due to his greater aims, McQuaid was succinct.

“Yes,” stated McQuaid as he thumped his shoe on his gold-encrusted desk.

Pundits around the cycling world were quick to comment on the statements.

“He’s completely nuts,” stated a commentator who may or may not have been David Harmon.

“I’m still a little vulnerable over the Armstrong business. I think I’m just going to say, “no comment,” go on a short trip to Mali, and hope this has all blown over by the Tour Down Under,” stated Liggett.

Greg LeMond, in the wake of his open letter to Pat McQuaid, was unable to offer any commentary as he was busy purchasing torches and pitchforks for an apparent Swiss Holiday on December 12th.