A barrage of media coverage after music superstar/part-time pro cyclist Bradley Wiggins won Britain’s coveted BBC Sports Personality of the Year has indicated that the guitarist from Paul Weller’s latest music project is aiming to become the first musician to win the coveted Giro/Tour double. 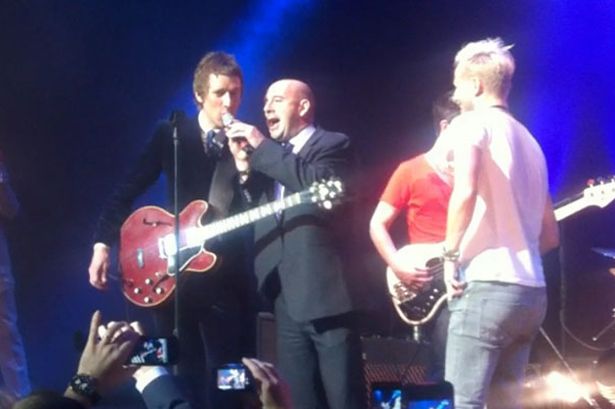 “Look, I can play the guitar. I’m in a soon-to-be-announced super group with Paul Weller. I ride a scooter. I’m starting a scooter racing league in Manchester in 2014.  I dress like a drunken sea captain. In fact, I have a new drunken sailor clothing line with Fred Perry. I’ve dropped all my long-time friends like yesterday’s paper. I deserve the opportunity to pad my ample bank account with two more victories,” stated Wiggins.

While Wiggo’s massive groupie following continues to fan the flames of his ego, the not-so-mopey modster’s plan for cycling domination has encountered one tiny snag – the commitments made by Wiggins and Team Sky principal/Dr. Evil doppelganger David Brailsford to perpetual bridesmaid Chris Froome. After “WonderWiggo” won the Tour de France in 2012, the duo declared Team Sky lad-in-waiting Chris Froome to be the definite captain for the 2013 Tour.

“Look, me and Davey are allowed to change our minds. Especially when there’s wads of cash being thrown our way. I mean, I need to make as much money as I can because the missus spends it faster than a 60 year-old cougar at the craps table in Vegas,” commented Wiggins.

However, one vocal critic of the the move is Tour de France champion Bernard Hinault, who famously dueled with his own number two, Greg LeMond, at the 1986 Tour de France. The move fractured a fragile La Vie Claire team, sending much of the team talent elsewhere in 1987. The war in 1986 left an unprepared Jean Francois Bernard to pick up the pieces, gasping up Ventoux during the famous Stephen Roche Tour victory the following year.

“You would think they’d have learnt their lesson. The biggest mistake I made was declaring after my 1985 victory that I would support Greg. It gave Greg focus. It gave him a target. And he kicked my cul all over France. I couldn’t shake the leech. In hindsight, I should have just shut my trap until the week before the Tour and then declared my undying loyalty to him,” said a nonsensical Hinault speaking cryptically.

Hinault went on to say two road captains on teams have rarely succeeded.

“Look what that Irishman Roche did to Visentini. How about Tejay and Cadel last year?  The only way it works is when you have a lieutenant who knows his place until the bitter end. Jeff Bernard to Miguel Indurain. Did you ever hear Bernard bad-mouth Indurain or challenge him? Hell no. If I were Brailsford, I would have kept Rogers and dumped Froome. He made his Wiggo bed, and now he has to keep lying,” commented Hinault.

“This team isn’t as strong as my 1986 La Vie Claire team. How many future winners were on that squad? How many wearers of the maillot jaune? What does Sky have? Without Yates and Rogers the task might be impossible. No amount of guitar-playing will make you faster on the climbs. Team Sky will have a catastrophe on their hands at this year’s Tour,” concluded Hinault.

Froome’s comments in the press today will certainly leave the fans with tantalizing excitement for quite the British spectacle at this year’s Grand Boucle.