After arriving in Adelaide for the final stages of the Tour Down Under, Tour de France legend Bernard Hinault was involved in a dust-up with one of only ten remaining ardent Lance Armstrong supporters worldwide. 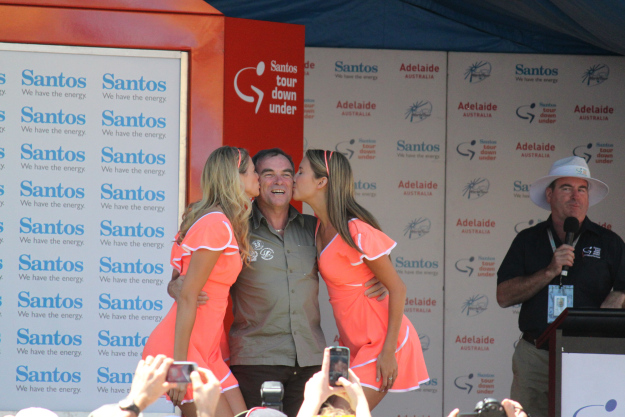 The skirmish occurred after the completion of Stage 3 in Stirling, and was apparently prompted by comments made by Hinault in a Rupert Guinness article appearing in the Sydney Morning Herald. Hinault was dismissive of Armstrong and stated the disgraced former age-group swimmer should be completely, utterly, and totally forgotten.

“It was truly unbelievable. The man threatened Hinault with physical harm and then followed up by saying he would spray paint Hinault bright yellow for his verbal transgressions,” recounted an amazed pundit who may or may not have been cyclingnews.com editor Jane Aubrey.

Hinault pushed the supporter off the podium in Stirling, did a double back flip onto the ground below, delivered his trademark “blaireau chop,” and incapacitated the crazed Armstrong fan. In a final display of strength, Hinault grabbed the yellow Livestrong Nikes which were on the feet of said fan, and proceeded to tear them in half with his bare hands, tossing them into the thronging Tour Down Under crowd.

Australian police forces quickly moved in to arrest the zealot, but due to Hinault’s shoe-tearing stunt, the crowds turned surly, attempting to attack the lone Armstrong supporter, prompting the police forces to protect the unfortunate fan. Riot police had to be called in to quell the crowds who were activated by the actions of Hinault, as ardent anti-Lance factions began attacking anyone wearing Oakley or Nike products.

“It was incredible. When he tore apart those running shoes, the crowd just exploded into a massive cheer. It was as if England won the World Cup the noise was so phenomenal,” commented Sky Sports writer Orla Chennaoui, who is in Australia for the Tour Down Under.

“However the joy soon turned to fear, as the crowds turned nasty. It was quite shocking to observe what happened after. I didn’t know clothing could burn that easily,” stated Chennaoui.

Led by noted anti-Lance advocate Martin Hardie, the crowds began building a giant bonfire, tossing in products by companies which had previously sponsored Armstrong. Nike products made up most of the massive stack, but the bonfire also had Oakley and Giro products thrown in as well.

In a scene lifted from Lord of the Flies, hundreds of supporters created makeshift loin-cloths made from modified bib shorts, placed Giro helmets on pikes, and danced around the bonfire for more than 30 minutes before riot police finally made their way into the venue to disperse the angry crowds.

Tour Down Under officials have come under fire, as they had assured the UCI and the teams attending the race that the event would be “100% Lance free” prior to the start.

“We’re rather surprised there are still Lance supporters out there, especially after the Oprah Winfrey interview. We took it for granted that we’d require extra security. Thank goodness Hinault was there to address this situation before it got completely out of hand. Yes there were bonfires and a little rioting, but it could have been much worse,” commented an anonymous TDU official.

Stage 4 begins in Mobury on Friday, with an emergency riot detachment at the ready in case there are any Armstrong supporter copycats looking to stage more trouble for the event.