Following a unique development in team performance management, Team Garmin Sharp have sought guidance on whether organic materials with a pointy end constitutes a ‘needle’. Wishing to remain leaders in anti-doping, the team would like to proceed with a controversial new treatment on riders but have hesitated until it becomes clear whether ‘f**king huge spider fangs’ are classed as needles. 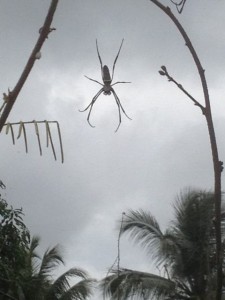 “I’d had a snake bite chicken meal in China last year and wondered if there could be some use of poisonous venom within rider care. When I saw the monster arachnid trying to steal a musette I got the bugger into a bidon and decided to test my theory. In a randomised double blind trial, riders who were whining about riding really fast in the rain had the spider introduced onto the massage table. One bite from that little beastie and complaints about riding bikes were eliminated and they all felt very keen to get back on a bike, albeit with a fair of bit of swelling to the lower limbs.”

Hearing of the successful trial, team director Jonathan Vaughters stated, “We’d like to extend the treatment to all team staff now, but need clarity from the UCI regarding needles. A team free from complaining is a happy team and I’d joyously have everyone bitten on a regular basis if it means we can engender a more upbeat atmosphere. Peripheral shutdown and shock is also likely to reduce catering costs across the board; I’m sure we can have people ‘food-free’ for several days at a time – good news for our budget and indeed our over-harvested planet.”

Whilst other teams are thought to be watching developments closely, zoo security agents have been placed on alert and all Brazilian Wandering Spiders have been removed from public view.