Flavio Becca reaches out to HSBC for sponsorship assistance

A day after losing the first of many sponsors from the RadioShack-Nissan-Trek fold in the form of European energy company Enovos, and with rumors of Nissan and Trek leaving along with garage door opener company Came, RadioShack-Nissan-Trek team license holder Flavio Becca announced he was on the verge of signing a new sponsor to fill the gaps left by the anticipated exodus. 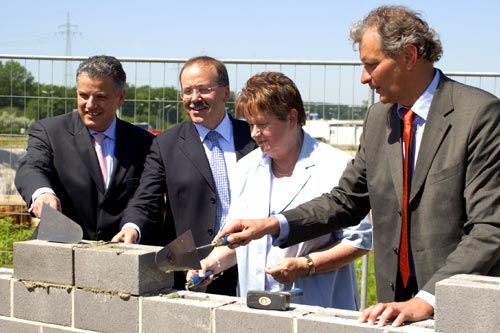 “I have begun negotiations for HSBC to step in to fill the void being created by the departure of our current crop of sponsors. HSBC shares a similar set of values with myself and my business dealings, not to mention a common philosophy on how we handle our rider accounts and banking clientele,” commented Becca.

HSBC has itself been mired in scandals that will cost the bank $2 billion in fines. HSBC first mis-sold loan insurance and derivatives, amid allegations that traders attempted to rig Libor, and endured a Senate investigation in the Unites States that saw HSBC laundering money for drug dealers out of Mexico.

Becca felt that an alignment with his team, temporarily called RadioShack-Nissan (Trek), would be just the tonic HSBC needed to divert attention from their scandals.

“They are a company that actually needs us. Our scandals pale in comparison to theirs. Just because one of our doctors is under investigation, our team manager/team management consultant is on the verge of a lifetime ban, and a partner in our marketing firm CSE is about to have seven Tour titles stripped, thos are just small potatoes. Throw in dodgy team decisions, non-payment of riders, lawsuits, and threats of benching riders who are signing with other teams – all really no big deal in comparison to HSBC’s problems,” concluded Becca.

HSBC representatives did confirm they spoke with Becca, but would only state the conversations were related to helping Becca fix his taxation troubles at home in Luxembourg, as well as to mention in passing that Becca had left a sponsorship package for them to look over.

“No matter how big the fines and how bad our reputation is, I doubt we’d want to align ourselves with a team that employs a manager facing a lifetime ban from cycling. Becca did tell us that he was willing to look for a new manager in order to secure our involvement, so we’re examining the opportunity for its potential,” commented an HSBC representative who wished to remain anonymous.

When asked about replacing Bruyneel, Becca indicated he has been looking at other candidates.

“I’ve had discussions with former Rock Racing owner Michael Ball. He seems to have a good head for business, and also past experience with champions in the sport. He also still races himself in America, or so I’m told; he might be the best choice for 2013,” stated Becca.

Becca refused to speculate on the status of Andy and Frank Schleck for 2013, but did state his desire to steal Chris Froome away from Team Sky, and also showed his displeasure with Bruyneel in defying his orders to allow Jakob Fuglsang to ride at the Colorado race with the ridiculously long name.

There was no timetable on a decison from HSBC on the potential sponsorship deal, but Becca has approximately two months to solidify the deal prior to WorldTour status review with the UCI.