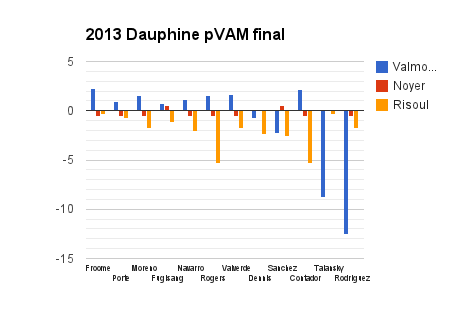 finishing out the pVAM analysis of the 2013 Dauphine 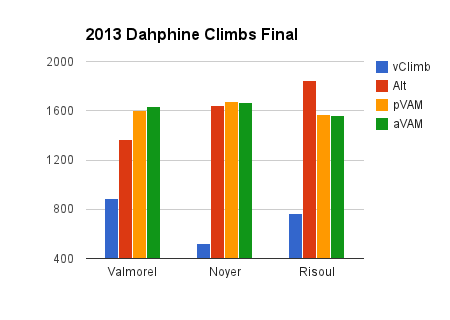 the Noyer the climb before the final bump uv a climb

cut things down to a select yellow jersey group

vClimb 521 meters of climbing at 1644 meters of altitude

with riders trickling in starting at

looking at the residuals

although the stage 7 Noyer wasn’t a finishing climb

while Sanches and Fugslang went a touch faster than predicted

on the proper stage 8 finishing climb

unfortunately we had Froome chained by Porte

riding well within himself Froome goes -0.4%

a touch slower than predicted

realy only matched by Contador

and showed that he still had kick

a week in on Stage 8

after his TT no show

before drifting back into training mode dragging Rogers around for kicks

what the hell good is

when only his 1.58 trumps Porte

of the other contenders

can you really call them that

1 week in a touch uv rain and we get

or a whole lot uv negative

is possibly in the ballpark of challenging Froome

the odds on favorite

gets left off the charts all together

allergies probably or was there a crash ? who knows