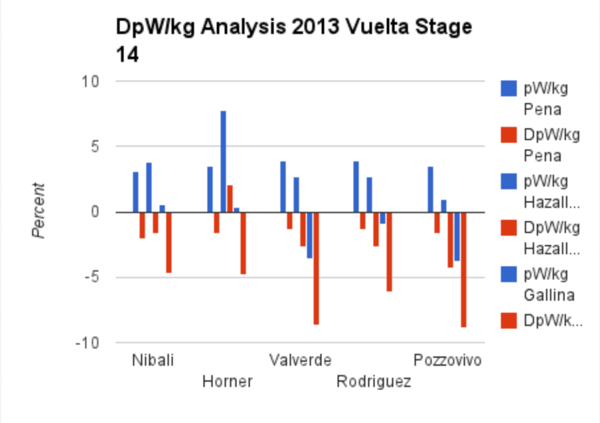 did the rain really put out the fire works?

with the performance from

in standardized W/kg terms (for a Froome sized rider)

Nibali and Horner put up

with a spread of

given the rain and the extra weight in wet clothes

split bars indicates that the performance was

faster than what would be expected

another way to look at the physiology of the performance

is to calculate the VO2max necessary pull of the performance

5.9 w/kg for the half draft condition

the total power can then be broken down into

with the reserve contributing the remaining 0.3 w/kg

(note that the extra 0.1 w/kg with rounding)

once the critical power is isolated

the VO2 required to produce the wattage can be calculated

and assuming that critical power is 85% of VO2max

the 70 ml/min/kg at altitude

works out to a sea level

would have required sea level VO2 max of

to perform at the level observed

then doping has to be considered a possibility

running through the same exercise

on Vayer’s data set for Lemond

put the vast majority of his performances

or well within the limits of his known physiology.