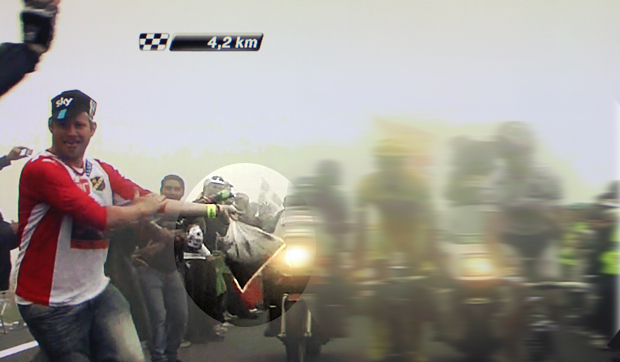 With Mr. Di Luca’s recent positive, the talk on the club ride at the weekend was back to what to do with drug cheats in sport.

As was to be expected the majority piped up saying that the only way to deal with cheats was to ban them for life, an understandable first comment, but this is something I feel is all too easy to say when it does not directly affect the speaker.

The “ban the cheat for life” phrase never looks to the word “why” – why do people take drugs to improve their performance, a question that goes well beyond the sporting arena.

It’s human nature to look for an edge sports and life, and we are told by historians that people have been taking PEDs since before the ancient Olympics.

Whatever the reason we must face one sad fact, if there is a pill or substance that makes you go faster, be stronger, or more alert at your desk (and I will make a confession here, as I type I am on my drug of choice, fresh ground coffee) someone will take it.

Cycling has a sad and sorry history of overt and known drug use, and because of that has become the sport that all other sports hide behind while pointing the finger (but that’s another rant), back to matters at hand.

Outside of sport, with the exception of the most heinous of crimes, we don’t ask those caught breaking the law (or taking drugs to do their job) to give up their career for life after being caught, in fact we try to use the justice system to both punish and help them.

With this in mind I thought we could apply some of the laws of the English criminal justice system to the punishment phase of drug use in sports, in particular the laws surrounding drunk driving.

In most cases of drunk driving the offender gets a ban, a fine, and is sent on their way, but in serious cases the system looks to punish and help the driver, with a form of advanced testing.

This means once a driver has completed their ban, they have to sit their driving test again, except this time the test is much harder to pass.

When a new driver takes a test, they are allowed a small percentage of errors. This is done because some aspects of driving only come with the experience that the new driver will not have gotten yet from a few lessons with an instructor.

However when the returning drunk driver comes for their advanced test the examiners don’t allow for any errors!

Also if the court wants, it can order the driver to attend counselling prior to ever getting near the driving school.

I think something similar to this can be applied to drug bans in sport.

Currently if a cheat gets caught, they serve their two-year ban, after which they can return to competition, and once back they are in the same drug-testing procedures their clean colleagues are on.

To my mind this raises the question, “Is this fair to the clean sports person?” and I would answer that question in the negative.

Therefore I suggest that if the drug cheat wants to return to their sport, they should be helped and made to work for the privilege of being a paid professional.

Here is my suggestion for advanced drug testing for returning cheats.

Let’s face it, at the start of your cheating career buying PEDs online may not be too expensive, but as you move up and have a fully-functioning programme including doctors, blood storage, blokes on motorbikes etc. the costs mount up.

So if you’re at the start of your sporting career and thinking of spending some of your hard-earned cash buying PEDs online, the cost of advanced testing might focus your mind and could deter you, but if you’re going to take the gamble, then I would suggest taking your PED money and putting it on the spin of an online roulette wheel, ‘cause it’s probably safer for your health.

Whereas if you’re an established pro with an some form of programme in place, then the cost of advanced testing will surely be a drop in the ocean to what you were paying for your programme.

Looking at Mr Di Luca’s “cycling is clean” statements before he was caught in the Giro, it is clear that good people who don’t take PEDs will forever be tainted by those who do. If you choose to race clean and make cycling your living or pastime, you must be prepared for the eyebrow of suspicion to be forever raised.

However I think with an advanced system of testing in place – paid for by the cheats – the clean will have hope that the eyebrow won’t be raised in their direction.