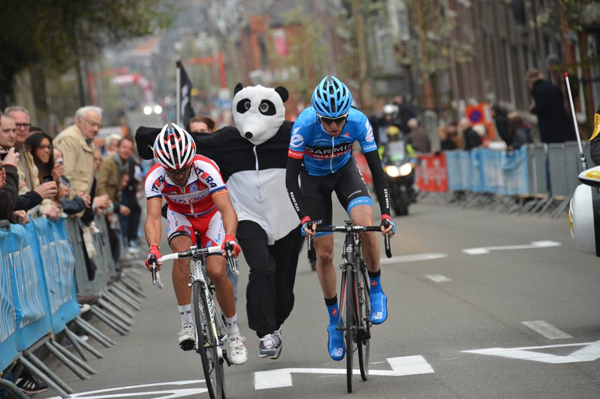 This week we introduce a new feature for Cyclismas. “Dear Aunty Holly” is not your typical agony aunt advice column. Penned by Holly Blades, “Dear Aunty Holly” takes on the vexing problems afflicting the peloton, and the “helpful” advice she dispenses is sure to amuse and entertain.

If you have a problem in need of advice, be sure to submit your letters to Aunty Holly care of the contact page.

A few months ago during what was a normal day at work fore me, I began to be aware of the sensation that I was being followed. Sure enough, a quick glimpse over my shoulder revealed an imposing monochrome form. At first, I thought my eyes may be deceiving me, but after a brief shift of concentration from the task at hand to my new companion, it became clear. I was being chased by a giant panda.

As you can imagine, my thoughts flicked to the reasons I may be in the predicament: Did I owe the panda money? Had I previously insulted his family? I did the only thing a sane man could do in my position – I pedalled my bike the shit out of there. Apparently I won Liege Bastogne Liege in the process, but the main thing was I was clear of the angered beast in pursuit.

However, no sooner had my heart rate (both through exertion and fear) returned to normal, than photos of me and said black and white menace were appearing on the Internet, and before too long, I discovered t-shirt manufacturers were cashing in on my terror and misfortune.

Fearing the authorities will laugh in my face, I need to know why this is happening to me! What did I do to deserve this, and what should I do if I encounter that furry bastard again?

The panda you so eloquently speak of appears to me to be the Panda of Awesomeness, a symbol of luck, prosperity, and, you guessed it, awesomeness in the Wallonia region. From your description I would say you are one very lucky young gentleman, as he appears to have you firmly in his sights. I imagine your passing through the Panda’s homeland gave him the opportunity to try and recruit you into his League of Awesomeness, and find your available dates for an Initiation Ceremony.

I suggest to allay any further fears of an unsettling encounter, you may attempt the Panda summoning ceremony – all you need is the blood of your rivals,  some oregano, a splash of Babycham, and a win at a major Belgian bike race.

But remember, the panda finds you. You do not find the panda.

Holly Blades can't ride a bike very well, and couldn't tell you a derailleur from a down tube (those are bike terms, right?) but what she doesn't know about affectionately making fun of pro-cyclists isn't worth knowing. Holly currently lives in Shropshire with a former pro (and his Belgian alter-ego), two rabbits, and an unfeasibly large collection of games consoles. You can follow her on Twitter at @lifeofholly and stalk her website hollyblades.com.