The hotly-anticipated Sky showdown of the Green Jersey vs. Yellow Jersey began in earnest today at the presentation of the 2012 Tour de France route. Recent addition to Team Sky and current world road champion Mark Cavendish was in attendance, with the requisite dour mood contractually obligated of all Team Sky überstars. However, the reigning modster king of Team Sky, Bradley Wiggins, was noticibly absent from the parcours release that favours the Briton. 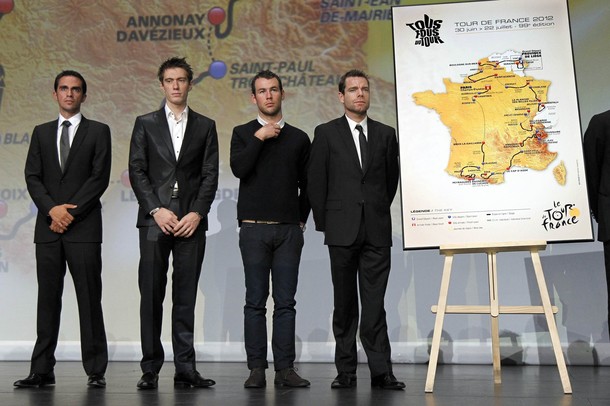 When asked why only one of his superstars was present for the route introduction, Team Sky impresario Dave Brailsford didn’t mince words.

“You’ll have to ask Brad the reason for that. I’m not in the mood to play your petty f***ing rivalry games when they obviously aren’t going to be a problem for this phenomenal team to win all the major jerseys at the Tour next year,” fumed Brailsford.

Cavendish, whose attire was as inappropriate as his tweets about the presentation, broadcast a few cracks to his followers about epilepsy sufferers and the blind – a blatant reference to the platoon of press photographers and Cadel Evans’ wardrobe.

The Manx Missile then commenced alternating phone calls between his longtime girlfriend, Peta, and his newest boyfriend, Bernard Eisel, eschewing the rest of the “mundane” pomp and circumstance.

When approached for comment on the route for 2012 by several of the journalists in attendance, Cavendish elected instead to treat them to his patented withering glare, but then offered to read from a prepared statement filled with telling Freudian slips.

“The Green Jersey competition is by far the most important competition in the Tour de France. The days of the impertinence [Ed. note: importance] of the yellow jersey are over. No one really cares about these ridiculous climbers turning around and looking at each other every 20 seconds,” declared Cavendish.

Buoyed by the cluster of cameras and microphones, Cavendish continued, “I think the fact that I’m standing here talking to you, and someone else is not, should tell you who is going to win the internal battle.”

When later contacted to comment for this story, a “vacationing” Bradley Wiggins reluctantly pulled himself away from an all-you-can-eat Italian buffet in efforts to replenish an emaciated Vuelta physique. He offered up this counter to the first bow shots fired by the Manxman:

“Look, I’m more interested in what’s on Coronation Street than what flows from the mouth of that fat prat.  Maybe if he stopped mowing down every pastry stand in Europe he wouldn’t need a tow up the mountains at every Grand Tour,” retorted Wiggins. “After all, if he thinks he’s going to have a go at anything next year he’ll have ask permission from the GC Boy Mafia here at Sky.”

GC Boy Mafia lieutenant Chris Froome also weighed in on the Cavendish situation, “I’m very concerned that having the Wiggo and the Fatman on the same team could result in an epic struggle for sustenance, which could inadvertently damage my opportunities in the long run, especially if I have to nurse the both of ’em over the climbs.”

Industry insider Richard Moore confirmed that the union of Cavendish and Wiggins under one banner could result in the same issue that plagued Morrissey and Johnny Marr during their first North American tour during their mercurial Smiths project.

“Having a double-dose of epic ‘sullenocity’ and monumental narcissism in the same sphere of influence could be an absolute windfall for rival teams. I expect a major implosion prior to Paris-Roubaix,” mused Moore. 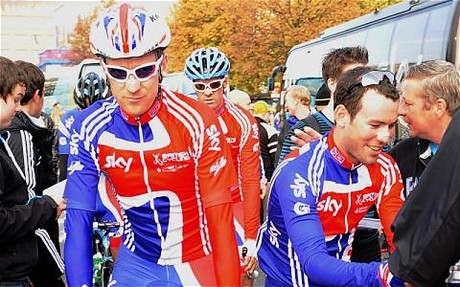 Wiggo and the Fatman (Photo: PA)