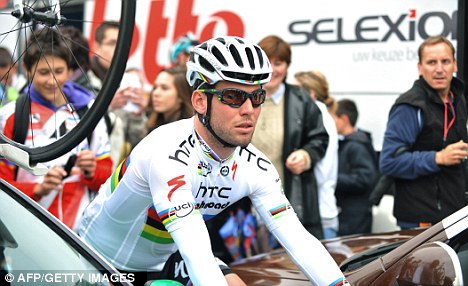 Inspired by the events that began in New York City on September 17th under the auspices of Adbusters, both gentlemen decided that “enough was enough,” and they’d “had their fill of UCI “over-regulation.” Cavendish, in fact, withdrew from the Giro di Lombardia in order to organize the Swiss demonstration.

“I’ve had enough of their bullshite, and the fact that I have to wear f***ing white shorts with my world champion jersey was the absolute last straw,” stormed Cavendish, “Pretty soon they’ll be telling me when I can have relations with my dynamite girlfriend, Peta.”

When told that this was technically already the case, especially if he were to be caught “mid-shag” by an out-of-competition biological passport control officer knocking on his door, Cavendish shrugged his shoulders and smiled.

“I haven’t had one of those since they started that bullshite program. I don’t think anyone actually ever has [had a biological passport programme control]. In fact, I can’t remember the last time I had to do a piss test,” stated Cavendish.

Cancellara was a little more reserved in his judgements, “I’m just disappoint that the UCI guys has forgottent my favorit status in 2011. I’m insult that even tho I was for shure great and sucsesfull at true racing, they’ve choosen to castet aside of my person for pockfaced Gilbert. It hurts my insideness.”

“Irksome” bloggers the world over, numbering in the tens of thousands, joined in the march from Vevey to Aigle. Standing in their support were some of cycling’s most vocal critics of the UCI, including Jonathan Vaughters, Eurosport’s David Harmon, USADA head Travis Tygart, Dr. Michael Ashenden, Franco Pellizotti, and the formerly-disgraced-and-now-vindicated Floyd Landis, who carried a burning effigy of Pat McQuaid. Curiously, when Riccardo Ricco pulled up in his sometimes partner’s Skoda, the entire movement barred his attempts to join the crowd.

UCI president Pat McQuaid and former president Henricus Verbruggen stood defiantly at the doors of world cycling’s headquarters, while the vast majority of UCI employees called in a “vacation day” and milled around outside, not quite sure what to do with themselves. Several were seen to be passing out file folders stamped “Confidential” to anyone who appeared even slightly interested. By the early evening, an informal twitter village had been set up to live-blog the event, with both Verbruggen and McQuaid still not fully grasping the impact of the social media platform.

Asked when the movement will end, Cavendish was cryptic, “This movement will end when the corrupt rulers of Aigle step aside for a Brit to rule this organization what’s been revived by the surge in cycling’s popularity throughout the United Kingdom. Or when I can wear my black shorts.”