As I am back in the realms of riding my bike regularly and attempting to get fit, I’ve been applying a little brain power to coming up with ingenious ways of torturing myself… Actually to be honest, I’ve been doing what I know works for me, and strangely enough that isn’t just repeating the most enjoyable ride I can think of.

Let’s clear something up, I can’t climb, well to be factually correct what I mean is I can’t climb QUICKLY. When it comes to racing, falling down hills is much more of a strong point of mine than scorching up them ‘polka dot jersey’ style. However I have been planning a weekly two-hour ride involving twelve seated climbs at a threshold effort; they aren’t long climbs, but with some riding on the flat at the bottom and top I can stretch the effort out and get used to riding at that threshold level rather than a quick 30-second sprint (which just about covers most climbs around my local patch).

A few people have said I am mad… why does a self-confessed non-climbing flatlander go out and ride as many as possible in two hours at least once a week? The answer to that is simple – despite my inability to move rapidly uphill I have known for a long time that this type of ride works wonders for my form, so I go and do them on my own to get the suffering out of the way with my iPod on as loud as I need it to drown out my wheezing lungs!

It’s too easy to fall into the mistake of ‘can’t climb won’t climb’. By that I mean, I know I am slow uphills, therefore I find riding up hills painful as I am on the receiving end of a battering from the group, which inevitably means I don’t enjoy them and the temptation then is to just do rides around the bulk of the Lincolnshire lanes (a notoriously flat agricultural county!). The problem with this is that if you can’t go fast up hills but you’re OK on the flat, all you are actually doing is training your strong point and ignoring your weakness. It’s even worse if you know that the training you are deliberately skipping is effective.

Which is where a lot of guys and girls I know tend to get caught out, even cross riders – they can’t bunny hop a hurdle so they don’t ever try, or they can’t run fast so they simply don’t do any running training.

So you climbers who can’t time trial… get out there and do it more often, and anyone out there who says they can’t sprint and never train for it or even try in a race, you’re your own worst enemy.

I know bike riding is a hobby, and enjoying it is incredibly important, but there is a grey area when you move from getting your enjoyment from ‘riding’ a bike, to getting it from ‘racing’ a bike. When it comes to enjoying ‘racing’ it’s derived from the result, which unfortunately means a compromise in the enjoyment of training and in my mind that seems to be where the distinction between the categories comes from. If you want to enjoy riding your bike every time you ride it, you are highly likely to find yourself a perpetual 3rd/4th category rider. If you’re happy to go out and torture yourself every now and then you stand a chance to move up a category. I am sure here is a direct correlation – more torture, higher category – however more reward, a result in a higher category race brings a bigger smile, and before you know it you’re hooked and you’re ‘weighing your lettuce portions’ to get your power-to-weight ratio optimised.

We all take what we want from our love of riding our bikes, it’s just a matter of juggling real life, and an inexplainable addiction for self-inflicted pain.. 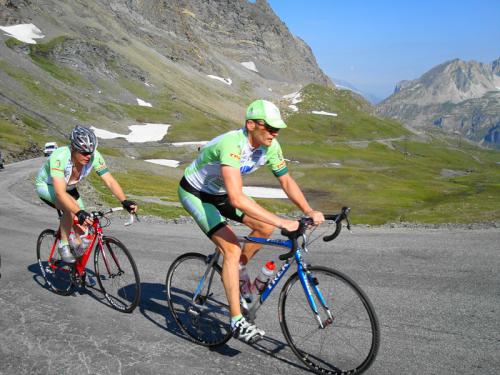 Riding up the Col Du Galibier with Ex-England Football player Geoff Thomas who was raising money for Leukaemia by riding the whole Tour De France route 2 days behind the pro’s. I did the middle week of the ride through the Alps… If you’re going to raise money for charity you may as well get right out of your comfort zone! 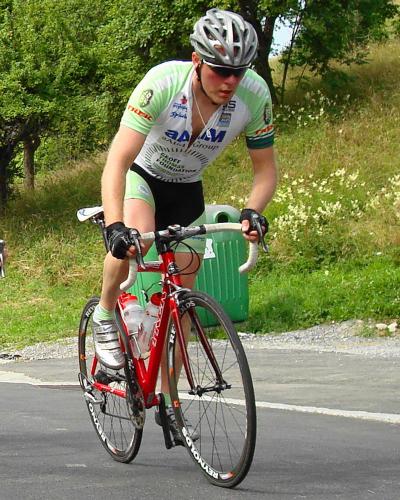 Another Alpine crawl, but I look like a natural at this speed right?