Bugno declares Cavendish a disgrace to the rainbow stripes

Bugno spent the day in a VIP media car, which subsequently was removed from the Tour “for excessive alcohol consumption,” and could not contain his frustration as he watched Cavendish “hump bottles like a sleazy Saudi camel” and tow the front of the peloton as if he were a “lowly Bangkok rickshaw driver.”

“Team Sky are a disgrace to cycling. They should be upholding certain standards as the team with the special honor of having the world road race champion, especially one recently declared the greatest sprinter of all-time by L’Equipe. A man of his stature deserves an entourage and red-carpet treatment, not the asinine disgracing for the service of that guy wearing the maillot jaune,” Bugno spittled. “When I was world champion, I never fetched a bottle, no matter how much better a teammate may have been, and that includes Laurent Fignon. What’s next? Being demoted to shuttling groupies to the leader’s room?”

In fact, Bugno feels that this could, in fact, damage Cavendish’s confidence heading into the Olympics as the reigning king of the roads.

“How would you feel after you’ve achieved a world-class stature only to have some depressed ex-Olympian with bad hair order you around? Not only is it a confidence killer, but Brailsford is playing with fire. What happens if Cavendish is injured humping bottles? Mark is also exposed to potential injury as he is expected to sacrifice himself and his bike for the supposed greater good. This smacks of communism. This isn’t cycling,” an emphatic Bugno declared.

Cycling pundits were also awestruck by Cavendish’s requirements for the Tour de France, including ex-professional Tony Rominger, who rode a short time with world champion Johan Museuuw in 1996. 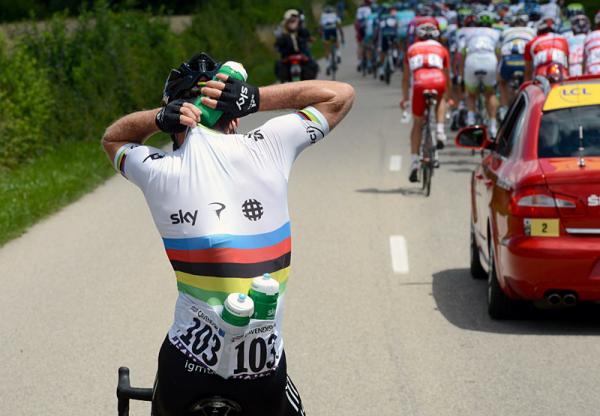 “I think there would have been a civil war in Belgium if I’d ever asked Johan to fetch me a bottle,” commented Rominger.

Even Garmin-Sharp head Jonathan Vaughters was surprised by Brailsford’s requests of Cavendish during the Tour de France.

“I had the world champion in the guise of Thor Hushovd in 2011. I could barely get him to ride, let alone fetch a bottle. I think if I’d even attempted to ask, I would have received a fine and a lawsuit from Pat McQuaid and the guys in Aigle for unprofessional conduct unbecoming the rainbow stripes,” stated Vaughters.

“I pray for Team Sky and David Brailsford that they win the Tour. If they don’t and it all goes out to sea, Cavendish will be beside himself losing out stage wins to inferior sprinters in the form of Peter Sagan and Andre Greipel. It will be a Tour that he’d rather forget, and it could mean his departure from Team Sky if he’s expected to do the same for either Chris Froome or Wiggins again next year. This is an utter shambles and complete disgrace to the honor and tradition of the rainbow stripes,” concluded Bugno.

Representatives from the UCI were not available for comment. The Tour pauses in Pau for a rest day on Tuesday.