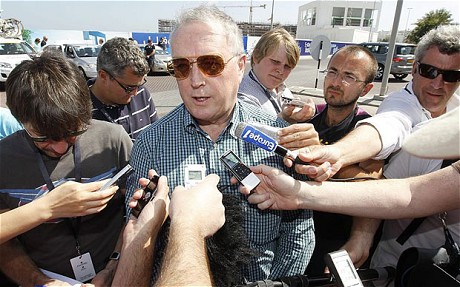 When the UCI published its press release as a response to Gerard Vroomen’s Biological Passport blog post, I couldn’t help but feel that there were a few questions that remained unanswered.

Vroomen said that he had not heard of any riders being tested from the end of the 2010 Tour De France until April 2011. He also suggested that this may have been because of legal fees incurred when riders, such as Franco Pellizotti, have gone to court to prove their innocence.

In the press release the UCI said that 1074 tests were conducted from 1st of July 2010 (excluding urine tests and Tour De France 2010) and 1577 completed for the period to the 30th April 2011. It also refuted the aforementioned claims that the funds were used for fighting legal cases.

Well, no. By concentrating solely on the period that Gerard Vroomen mentions and throwing some numbers somewhat belligerently in his direction, the UCI have, unconsciously or otherwise, completely side-stepped the issue that Vroomen was trying to highlight. As he said in the follow-up post:

I did not say there were zero tests, just that I’ve heard from riders and team managers that they haven’t seen tests being carried out, while nobody told me the opposite. And that’s a stark contrast to say 12 months ago. Obviously I did not check the 1000+ pro riders all individually.”

All the UCI have done is point to the fact that there were some tests carried out. They have said nothing regarding whether the total number of tests has risen, fallen, or been consistent since the commencement of the biological passport programme.

And if Gerard Vroomen’s anecdotal evidence isn’t enough, how about Michael Ashenden, one of the leading experts in anti-doping? Speaking to Cyclingnews.com, Ashenden said:

It’s correct that the observation made by Gerard Vroomen matches with my experience. I have noticed a significant gap between tests in some of the profiles I have reviewed. It’s definitely not in every single profile, but enough to have left an impression on me.”

Somewhat worryingly, what both Ashenden and Vroomen assert is true. The number of tests have fallen.

When Anne Gripper gave her presentation on the biological passport to ANADO in the autumn of 2008 she stated that the target number for testing in 2009 would be in excess of 11,000. The actual number for that year was 10,603. The number of tests carried out in 2010 fell to 8,342.

I asked the UCI why this would be. Spokesperson for the UCI, Jane Moraz told me:

The success of the biological passport has allowed us to better target riders rather than blindly test across the board.

A relatively high number of tests must be carried out to establish a rider’s biological passport, but fewer tests are required to maintain the passport once it has been established. Only those riders whose passports give cause for concern will be tested more often.”

It seems to me that the thinking here is flawed. Potentially fatally. A high number of tests at the beginning of the programme should continue to be a same high number of tests throughout the programme. The whole point of the biological passport is to provide continuing data for all riders. It was devised to monitor biological markers of doping over a period of time. But the UCI’s targeting policy assumes that these other riders deemed not worthy of their continual attention aren’t up to no good in their absence. It wouldn’t take much for a rider to notice that he isn’t being tested quite so much or as often as he was the previous year.

Going back to Anne Gripper’s presentation, where she also stated that there would be “anonymous public release of the data each quarter,” this simply has not been done.

When asked about the failure to meet this promise the UCI told me;

It is true that it was stated at one point that there would be an anonymous public release of results each quarter. However, in the light of our experience with the biological passport we realised that this measure would not be particularly useful, especially as an anonymous report would carry little weight.”

Fair enough, except that some people are more than a little geeky and have nothing better to do with our time but pore over the resultant chemical analysis gleaned from months and months of a pro-cyclists pee! If you are indeed one of those people, I can only apologise on behalf of the UCI that they cannot assist you with your chosen pasttime.

That being said, I was assured by the UCI that cycling’s main stakeholders – the teams – were receiving regular updates of anti-doping tests and statistics. This information, the UCI said, was not being sent out to the media.

However, sources from three teams have confirmed that they only receive anti-doping data once per year. Certainly, you can’t argue that sending data to the teams once every 12 months constitutes regularity. But is it in the spirit of the word’s definition? I don’t think it unfair to suggest that the statement I got from the UCI would lead me believe that “regular updates” was something more substantial than yearly. I wouldn’t consider getting a Christmas card from someone as “regular” correspondence – even if they include an typed A4 piece of paper detailing how little Johnny was doing at school and how they spent their holidays in Mexico this year (Lovely place, you should try it –can’t recommend it highly enough. Oh and the food…!). Regardless, if the amount of data represents all that the UCI have collated, yearly is a world away from regularly.

This is not what you and I believed would happen and it’s not what the teams signed up for. Elite-level teams are paying €120,000 each year in contributions towards the biological passport. Did the UCI make it clear that this figure would remain constant while the number of tests undertaken would fall?

Indeed it is not only that the price the teams have to pay is to remain constant. In March this year a letter was leaked to the nyvelocity.com website. The letter was written by Jonathan Vaughters in his role as President of the AIGCP and was sent to UCI President, Pat McQuaid. Vaughters was responding to UCI demands that Pro Conti teams should receive a €20,000 increase to their biological passport bill from the €60,000 that they previously paid. As the AIGCP President pointed out, the teams support 70% of the biological passport annual budget and the increase represents in excess of a 33% price hike. The UCI only contributes 14% to the budget and saw its bill rise by a meager one percent in 2011.

Interestingly, in the leaked letter, Jonathan Vaughters also points to teams noticing a “significant drop in unannounced spot checks to their riders since the the start of 2011…”*

Is it any wonder that some are asking what on earth the UCI are doing, and if their implementation of the passport is nothing more than a feel good PR exercise aimed more at calming the nerves of sponsors, than actually catching dopers?