James Stout was a twenty-something year old PhD student who also happened to be a bike racer struggling with a form of Type 1 diabetes while studying at UC San Diego.

After a chance encounter at the Tour of California where he met some like-minded individuals who shared his perspective and his struggles, James joined his new soulmates on Team Type 1, a professional cycling team comprised of athletes also suffering from Type 1 diabetes.

For a year or more things went beautifully for James and his relationship with the team.

This is my discussion with James about his ups and downs during and since that time. ~ Bikezilla 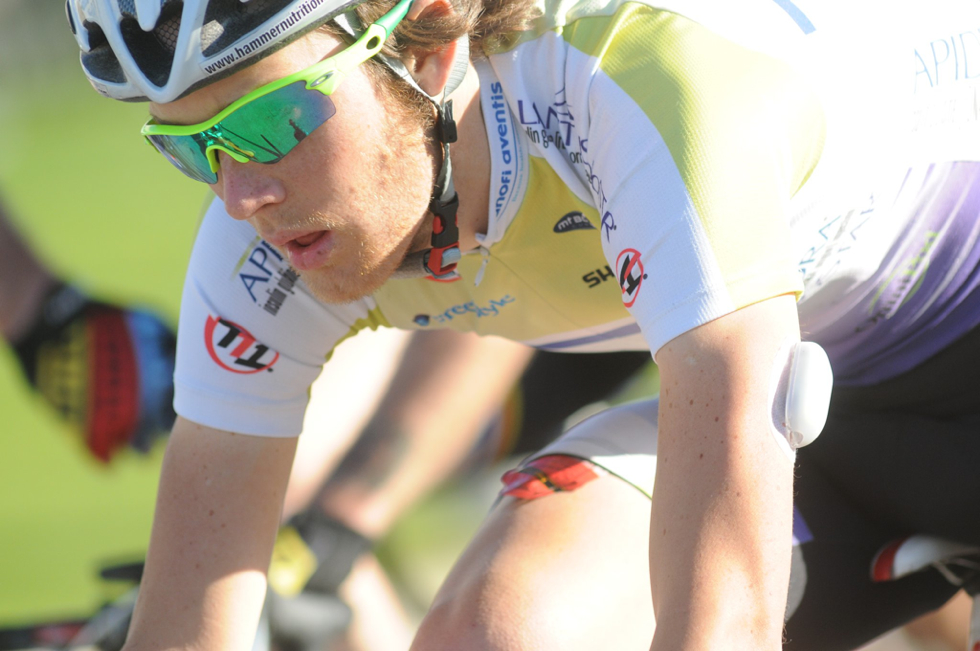 In an interview with Ioana Patringenaru  in This Week @ UCSD, you said:

“I used to use diabetes as an excuse for doing badly. Now, it’s a motivation for doing well.”

It sounds like you had some problems before getting into cycling. What kind of problems?

When I got diagnosed, my doctors told me I had to start playing chess.

I told them I wanted to be a professional cyclist, they told me to give up.

I used to get wicked low blood-sugars in races. Or I’d go high and my body would fill up with lactic acid. I would eat the wrong stuff, or eat at the wrong time, I wouldn’t know when to take my insulin before a race. Things like that.

There’s no advice, there’s nothing out there.

You go to your doctor and you say, I want to ride bikes, I want to race 200 kilometers (km).

The first time I said that he said, that’s not possible, people don’t do that. I told him they did and he just told me I was lying.

Then I produced evidence to the contrary and he just said, well that’s not for you, you can’t do that.

So I fought to overcome that, I guess with trial and error. And I made loads of errors on my way to finding out the right way to do it.

Definitely turned the page, really. Perhaps more so even now that I’m not with Team Type 1.

I don’t know how much the diabetes thing really means to anyone anymore. I thought it meant a lot to everyone there. Now I know that it means a lot to me and I had to experience some things, like all of these things just recently. In the U.S. especially with the healthcare system.

I’m just deeply passionate and really involved in showing diabetics that they can do whatever they want and spreading that message. Being something of an example as best I can.

When they told you you had to go play chess, that really had a big impact on you.

It really did, yes.

I think about that every time I get on my bike. That pissed me off.

If you want me to do something, the best way is to tell me I can’t. Because I’ll make sure that you get proved wrong. That pissed me off more than I can say.

I’m prepared to sacrifice an awful lot. I wanted something. I wanted it really badly and someone telling me I couldn’t have it, especially that coldly, then laughing about it and saying, well you can go play chess.

The doctor was laughing when he told you to play chess?

Yeah, it was like, ha ha ha. It wasn’t like, sorry son. It was like, you’re taking a pinch if you think you’re going to be a bike racer and you’ve got type 1 diabetes.

It was like I told him, hey, I wanna be a hedgehog.

My little cousin told me once that when she grew up she wanted to be a hedgehog.

Yeah, it was like I’d just manifestly told him something clearly impossible.

So I like to think that I’m doing the impossible and proving it’s possible.

You rode for both TT1, a professional team, and UCSD, a collegiate team, at the same time?

Yes, you can ride collegiate in the U.S. So I rode UCSD in a collegiate capacity and TT1 in all the other races.

How did you handle that schedule?

There weren’t too many conflicts. The collegiate level was just kind of fun.

While with TT1 I was studying for my PhD.

The nice thing about being a history PhD, is you don’t have too much of a schedule. You’re never massively obliged to be in any one place at any one time. Aside from my teaching (JS was a teaching assistant – Bz) I could set my own schedule.

That meant I could spend most of my time riding and the rest of the time reading.

It would seem that I’m very organized, but at eye level I’m really atrociously organized. But somehow I made it work.

And when I do my research on history, it’s on cycling, the history of cycling as national identity here in Catalonia.

It kind of segued together nicely.

I had a very supportive set of professors.

The staff at UCSD, they still check out my Twitter, they look up my race results, they email me when they know I’ve won a race. They’re great.

I owe them a lot.

You lined up some sponsors for UCSD’s cycling team and became the team’s “Coordinator of Sponsorship”. Was that on your own initiative?

The thing about collegiate cycling is that people aren’t sponsoring you because you’re The Shit.

If you’re under the impression that they’re sponsoring you because you’re good, then you’re misleading yourself. Because if you’re in collegiate cycling, you’renot that good.

No one buys a frame because they saw a dude on a collegiate team riding it.

But what the sponsors do realize is that everyone started out as a beginner. And they want to help guys who are just starting, especially when they don’t have much money, and if you can support these kids and build a sense of loyalty to your brand, then years to come when they’re doctors, dentists, lawyers, then they’ll keep buying your stuff.

I come from Europe, where I didn’t buy a bike until I was 18. Because I’d go to the club and people would give me bikes, and give me kits, and give me helmets, and drive me to races.

In America cycling is such a middle class Bourgeoisie sport. It disgusts me that you can be priced out of it.

So my big goal was that no one was priced out of the sport.

There was one guy who came to us. He had seen our race one year and he said, “I want to be a bike racer.” And he brought this bike he put together from stuff he found in trash.

Different types of wheels and . . . We managed to cobble him together a proper racing bike somehow.

And that’s the biggest achievement for me in collegiate cycling, was getting these kids bikes so they could start racing. Giving them access to the sport.

I strongly believe that’s what it should be about.

I strongly believe that the U.S. has a really big problem with its cycling culture in that they fundamentally hug the wrong target.

Not people in the range of 35 to 50, buying bikes that cost more than I earn in a year. Those are people who’ll buy bikes anyway if they want to buy bikes.

Did any of that carry over to your time on TT1?

Not at all, not as a coordinator. I was able to reach out to a lot of our sponsors and make contact with them directly.

I would never say I coordinated a sponsorship. But, I was lucky enough that I’d do some product days with our sponsors. I was able to connect with Glacier Gloves, with Hammer Nutrition, with all the guys at training camp, like VSP vision care, like the guys from Shimano. And obviously I did some work with the diabetes industry sponsors.  They gave me some great opportunities.

I remember doing a crit earlier this year in L.A. somewhere and I’m off the front and one of the dudes from Shimano, he’s standing in the pit. He comes out and he’s holding out his hand like he’s going to give me a feed and he just wanted to give me a high-five because he was so stoked to see someone from this team off the front.

I built some pretty good relationships with sponsors, but I was never involved directly in coordination of that. That was something that went on in some office somewhere.

I don’t like racing around with stuff painted all over my body if I don’t know . . . I don’t like representing people if I don’ t know who they are or what they produce. It always meant a lot to me to get to know the sponsors.

You’re originally from England and you did your undergraduate studies at Oxford?

Yes. I’m in Spain, now. I studied my undergraduate at Oxford, then went to UC San Diego.

You went from Oxford, a very prestigious school, to UCSD, which is anything but prestigious. How did that transition happen?

UCSD has one of the best Spanish History programs in the English speaking world. I’d go as far as saying the best in the U.S.

So, in my small field it was probably the best place to go.

I had offers from Harvard, Princeton, all those places.

I wanted to ride my bike. I wanted to enjoy my PhD, and I didn’t want to be in an environment that was highly competitive, as I was as a grad student. I worked pretty hard at my undergraduate.

UCSD has a super-supportive, nurturing environment. It’s a wonderful place to live.

So, that’s how I ended up there, really.

They had a great faculty and I revere them for the time they spent with me.

Prior to your time with TT1, when you were attending UCSD and riding only for them, how did you get your insulin and testing supplies? Who helped you with your treatment?

That was sketchy. My mum shipped me some from home. I saw a doctor who I wasn’t able to get UCSD to pay for all the time and he hooked me up with samples.

I begged, borrowed and stole. I did what I had to do. My control wasn’t the best.

I did what I had to, but essentially my health paid the price.

The demands on your body and how they stress your diabetes riding at a collegiate level must be somewhat less than riding at a professional level.

Yes. But cycling or not, if you aren’t getting the correct insulin it’s not good for you. You will go blind, you will lose limbs, you will have kidney failure. Without it you can’t survive.

I didn’t realize quite the extent of the U.S. health insurance kind of shambles until a bit too late.

Stay tuned to Cyclismas for Part 2 of Bikezilla’s interview with James Stout, coming later this week.