At a dinner gala in Luxembourg to honor Uzbekistan socialite Gulnara Karimova on Thursday, RadioShack-Nissan team owner Flavio Becca unleashed a tirade of angry comments after a dismal start to the 2012 season for his high-priced WorldTour squad. 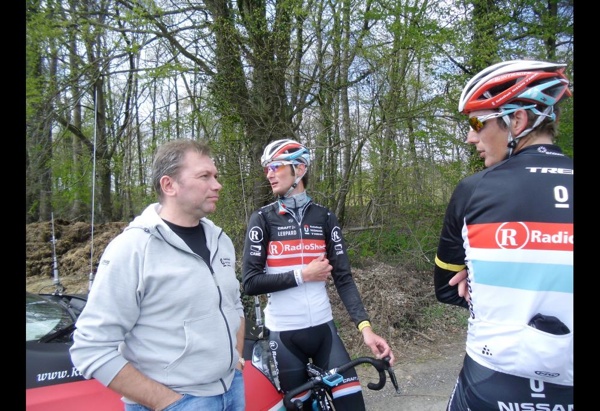 According to anonymous sources, Becca was heard discussing the “complete and total ineptitude of the chunky chin-dimpled charlatan” who promised him a top team finish in the World Tour capped off with a Tour de France victory.

The fashionable Karimova was seen giving pointers to Becca on how to deal with “servants who won’t listen,” advice which, according to those same anonymous sources, gave Becca an ear-to-ear grin. The Uzbekistani first daughter was in Luxembourg pitching her line of clothing, her new album, and also celebrating her recent request to be the official Uzbekistan representative to the United Kingdom. It has been rumored that Becca is collaborating with Itera’s Igor Makarov on several construction projects in the emerging oil nation, and the appearance at the event would confirm there are discussions in the works.

When asked directly about the Bruyneel situation, Becca was forthcoming on details.

“I’m tired of the excuses from the Johan. He has been blaming Kim Andersen for all the troubles to start the season, so I have removed Kim from the Tour de France and told Johan he has to sit in the car and personally oversee the Andy victory I’ve been promised,” commented Becca.

Becca also offered answers to questions on the lacklustre start to the RadioShack-Nissan season, where the team has enjoyed only two victories, whereas at the same time last year under former team manager Brian Nygaard, they had nine to their credit.

“As long as there is victory at the Tour, I will be somewhat serene with the fact there is less wins this year,” adding, “…but that doesn’t stop me from calling Johan at least 15 times a day wanting explanations on why we’ve lost at almost every single race. I have mellowed slightly this year, though. Last year I called Brian at least 17 times a day, and also demanded a report of where he was at the time, what he ate, and a daily update on team expenditures in detail via written report and oral conference call.”

When asked if a loss at the Tour would spell the end of the relationship with Bruyneel, Becca confirmed there were negotiations with other cycling experts.

“Considering Riis‘ situation with SaxoBank at the moment, I have reached out to Bjarne to see if he’d like to join our fold. The poor man is in a similar situation to Johan’s last year. Hopefully I’ll be able to negotiate a better deal with Bjarne as he is someone who has a proven track record to create winners from multiple athletes, rather than just one,” concluded Becca.

Becca is heading to Liège-Bastogne-Liège to directly oversee the team, and to negotiate with UCI president Pat McQuaid on relaxing the WorldTour rules in order to allow Bruyneel the ability to ride in the team cars at the Tour de France, in spite of the fact Bruyneel is not listed anywhere on the team paperwork and current rules thus prohibit his direct participation.