Back to the Future?

Adrian Smith (@cavalierfc on Twitter) is an Australian pro cycling fan with a passion for clean sport. He is a frequent contributor to The Clinic doping sub-forum on CyclingNews.com, as well as a thoughtful commentator on the current crossroads in the sport. He wrote a definitive piece on the Lance Armstrong situation on his tumblr blog which was critically acclaimed. Here he shares his closing thoughts on this year’s edition of the Vuelta à España.

The 2012 Vuelta has been run and won. The history books will remember it as potentially being one of the finest editions in recent history. Alberto Contador was the victor, but for many cycling fans the victory will have been both entertaining as well as hollow, if only because of who ended up being the winner.

Plenty of contenders lined up for this race, and it was keenly anticipated. Chris Froome would get the opportunity to lead a team for the first time, aiming for victory. Joaquim Rodriguez would try to go one better than his Giro 2nd place, and of course Contador would make his return from a doping suspension. Alejandro Valverde would look to add more impressive results to his stage win in the Tour de France. 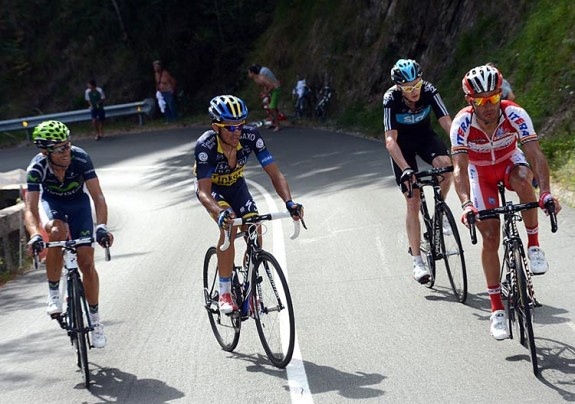 The beginning of the podium sorting. (Image courtesy of Cycling Weekly)

It’s worth pointing out here, before we dive in with any commentary, that the Vuelta this year was an absolute beast of a course. Far more difficult than the Tour, and the Giro also somewhat paled in comparison. With a stunning ten summit finishes, it was a course made for climbers, and one where we would normally expect to see a rider ‘bonking’ in a big way, unable to cope with the continuous demands of hard climbing with little recovery time.

In truth, what we saw was far from that, and the reality is that the climbs also saw the highest comparative wattages of all three Grand Tours this year, on a par with what we saw in 2001, an era we obviously now know to have been heavily doped. Here are the brutal figures of it, clearly in stark contrast with recent mantra of what we’d consider a ‘normal’ performance:

These figures, calculated on a French site using the averages from the five climbs over 20 minutes in this year’s race, are in stark contrast with the average wattages we saw from the victors at the other two Grand Tours this year:

Provided those numbers are calculated consistently, there is a significant margin there that means that any of the top three would likely have won the Giro or Tour by minutes. Except we know, courtesy of Valverde, that he couldn’t produce numbers anywhere near that in France, where he finished a distant 20th, albeit with a stage victory to his name.

Remember – because this needs emphasis – this was by far the hardest race of the year, with the steepest climbs, and yet some of the power rates we observe here are made in the third week, a period where fatigue would certainly have been present.

I’ll go into why those factors are worthy of attention in a moment, but first, it’s worth having a look at those who made such a large effort, and their year in the sport.

Contador, of course, was freshly returned from what amounted to a six-month suspension – with his results of the 18 months prior to that annulled – after testing positive for clenbuterol in the 2010 Tour de France. That Contador’s case went to CAS in the first place was because of a somewhat intriguing process of investigation by Spanish authorities. Initially recommending a one-year ban, they then cleared Contador, a process both WADA and the UCI found disturbing enough to convince them to appeal the decision to CAS themselves. The process was seen as indicative of a Spanish unwillingness to investigate or prosecute doping cases involving Spanish athletes.

The suspension consequently had two effects. Contador obviously lost his results, but of more relevance was that his Vuelta preparation was enormously hampered by a lack of racing time. Contador’s only race post-suspension – and prior to the Vuelta – was the seven-stage ENECO tour in which he finished fourth. So he came into the race high on training time, but significantly under-prepared in races completed during 2012. It’s therefore fair to suggest that Contador would not have been at his peak, but would have been very familiar with the route.

Joaquim Rodriguez, in contrast, is the Spaniard upon whom the most accolades have been lauded in 2012. Second in the Giro d’Italia (winning the points jersey and two stages), first in La Flèche Wallone, and with multiple other top-ten finishes dating back to the Tour of Oman, his has been a very long season, but also his most successful. It meant he came to the Vuelta as a polar opposite of Contador: over 40 racing days completed, and for the second year in succession he was to attempt the last of two Grand Tours in a year. At 33 years of age, that’s no mean feat, and few at his age have managed to complete two Grand Tours on the podium in a calendar year.

Alejandro Valverde came to the Vuelta after an even more exhausting schedule, starting his season eight months earlier at the Tour Down Under, where he finished second. Valverde went on to ride at least 50 more days prior to the Vuelta, including the Tour de France and Olympic Games, and yet still put in one of the best performances of his career by finishing second. Had he not been involved in that famous crash during echelons in the first week, who knows if he would have been able to take the top step instead?

Chris Froome rode having completed months of exhausting racing in peak condition, as the right-hand man to Bradley Wiggins, and then on his way to collecting a bronze medal at the Olympic Games. It was probably expecting too much of him to be able to compete at the Vuelta, but after his strong showing last year – and at times looking stronger than Wiggins at the Tour – Froome’s name was right at the head of the list of contenders for the Vuelta. Of all the contenders, his performance probably best showed what should be expected of his schedule. He was promising in the first week, but ultimately his program caught up with him, and he faded, exhausted in the final week, to finish a distant fourth.

So our leading four contenders (and as it turned out, also the top four finishers) all came into the race either under-prepared, or after long and difficult goals had already been undertaken during the course of the season.

So how, then, are the year’s most extraordinary climbing numbers produced? Put into perspective, if Rodriguez had managed to do the wattages in the Giro that he displayed in Spain, Hesjedal would have been so far out of sight that his time trial would have been for cementing second place, and not remotely competing for first.

This was an outstanding race by any measure. Contador’s victory in Fuente Dé will live long in the memory for its sheer audacity, its plot hatched and executed long before the final climb, to almost universal acclaim. The three weeks had all the drama, entertainment, and panache the world longs to see at the Tour de France.

But, after the bitterly-public Armstrong events played out over the last few months, it also failed to dispel lingering questions about the sport. Make no mistake: The top two riders from the Vuelta have both been suspended for involvement in doping. The third has been around teams clearly associated with it in the past, although never sanctioned himself.

The world has just watched a man found guilty of (and suspended for) doping come back and win a Grand Tour just weeks after that suspension finished. They’re entitled to wonder if it’s genuine.

These three riders on the podium are not strangers to the sport’s ills. Fans have seen too many false dawns over the last twenty years to not raise an eyebrow when something very extraordinary occurs, and in one of the hardest races in recent memory, we have a reminder that the past is very much still here with us in the present, simply as a result of observing the identities of those undertaking such feats.

I’m not suggesting or implying that anybody is doping now. There could be a reason why they’ve struck super-human form at their home event. But over the last few months we’ve been told to put our faith in the numbers, to take into account the climbs when viewing those numbers, and the reality is that what we’ve witnessed here fails the most basic test – that of human instinct. We may have been witness to the show of a lifetime, but we must consider – was this simply the same show we’ve seen before? If the identities of those at the front haven’t changed, and the numbers aren’t lying, how can we know the culture has shifted?

Of that we can only be sure of one thing, and that is that time will be the best judge. Until then, we’ll have to wait and see if these numbers translate to equivalent gains at next year’s major events. If so, what will be the world’s determination then? Are we going backwards, or forwards?