Days after Lance Armstrong was dropped from the board of directors of the Livestrong Foundation, and just one day after the cancer charity removed Armstrong’s name from its legally-registered title, famous Armstrongs around the world have filed a class-action lawsuit against the disgraced former age-group swimmer. 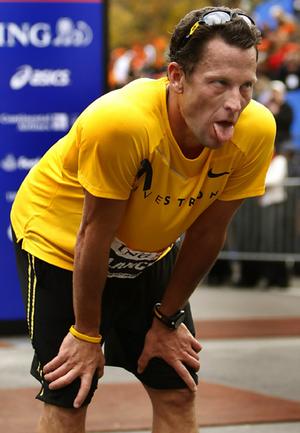 The estate of the late astronaut Neil Armstrong, along with Victoria Armstrong, Billie Joe Armstrong, Dido Armstrong, and BJ Armstrong have all filed a civil action in an Austin, Texas, court on behalf of Armstrongs around the world. In the suit, they demand that Lance Edward Armstrong to return to his birth name of Lance Edward Gunderson following the “the worldwide damage to the good name Armstrong” caused by massive PR fallout related to USADA sanctioning of the former Tour de France winner.

“It pisses me off. After concerts, my fans ask me if Lance is my brother or my cousin. When I tell them no, they all breathe a sigh of relief, you know? I mean, I think I should dedicate our song “American Idiot” to that guy because he’s made life difficult for me as an Armstrong,” stated Green Day front man Billie Joe.

The musician concluded, “Why should I suffer because he chose to dope? I think it’s only right that he goes by Gunderson. It sounds more creepy. Like him.”

Representatives from Neil Armstrong’s estate, which originated the action, were stronger in their comments about the disgraced charity club cyclist.

“Walking on the moon was synonymous with the name of Armstrong. Gunderson’s actions have sullied the legacy of the much-revered Armstrong name. Instead of thinking about the great things humanity can accomplish in a single step, Gunderson has caused the public to think about nefarious activities. Bullying, witness intimidation, refusing to confess, shameless allegations of philandering. If he wants to continue with that behavior, he can do so as Lance Edward Gunderson. Not Armstrong,” stated the lawyers representing the Neil Armstrong estate.

It wasn’t clear if the group was seeking any monetary damages, or if they were simply hoping to force Lance Armstrong to change his name back to that given at birth.

“We are concerned about remedying a tainted legacy that has befallen the maligned surname first. As such, we are actively seeking other Armstrongs to come forward and join the lawsuit. We have several of our team evaluating the financial damages incurred by his actions. We should have an answer very soon,” commented the legal representatives for the class action suit.

“I expected this to have transpired much sooner. To be honest, Lance’s actions are more in line with the machinations of a Gunderson than that of an Armstrong. The Armstrong name has long enjoyed a respected place in popular history. Let’s hope this lawsuit will restore that surname to its proper status,” commented a commentator who may or may not have been Rouleur Magazine‘s Ian Cleverly.

The group representing the Armstrong name expects an imminent ruling from Judge Sam Sparks, which would allow the lawsuit to proceed  as soon as next week.