The past six months have seen the toughest challenges Lance Armstrong has faced in his entire career, and after a tremendous string of victories it seems the former age-group swimmer has thrown in the towel, declaring himself the “biggest loser in the history of humankind.” Armstrong has fired his formerly-influential inner circle and hired career revival specialist Robert Downey, Jr. 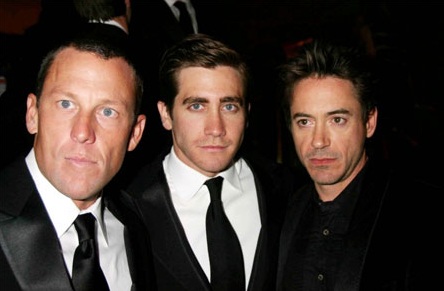 “I’m just shocked Lance did this to me. After all I’ve done for him, including writing a career-ending defense of his actions, and this is how he treats me? He burns me, doesn’t give me the exclusive, and runs to Oprah?” fumed the recently-RIF’d Jenkins.

Reports are that Robert Downey, Jr. met with Armstrong in Hawaii after an urgent phone call from Armstrong’s baby mama, Anna Hansen. The Ironman star hopped on the first available flight to meet with Armstrong in his Maui compound. The two shared tuna melts – Downey’s former favorite hangover cure – indicating Armstrong has allegedly been on another one of his trademark drinking binges.

Sources close to Downey Jr. indicate the former Brat-Packer discussed in detail his own epic meltdown, including a break-in at a stranger’s house to curl up in a little girl’s bed. The actor chronicled his rise back to the top, including his personality transformation to “humble and charming” superstar from the “sociopathic drunken attention whore” he used to be and feels Armstrong is emulating.

“Bob encouraged Lance to do the Oprah thing even though it’s basically only on a cable access channel rather than a real network. But hey, it’s a start. Plus, Oprah needs all the help she can get at the moment,” stated an anonymous source close to the situation.

Following the tuna melt bonding session in Maui, Downey Jr. brought Armstrong back to his Malibu retreat for some “guy time” and to meet his Buddhism guru to work on deflating the massive Armstrong ego.

“It’s been a challenge. There are so many foul layers to Armstrong’s onion that have built up over the years. His toxicity is massive. Bob even had to bring in Ramon Estevez to give Lance some tough love after Lance berated a cocktail waitress at a downtown Los Angeles eatery. Ramon basically told Lance to ‘grow the fuck up you little piece of crap, no one cares about cancer or bicycles anymore.’ He made Lance cry like a baby right there in the restaurant,” stated a Downey Jr. confidante.

No word what Downey Jr.’s next moves are for Armstrong, but the buzz it that he’ll be working on helping him fashion a new career. Rumors are rampant that it will be either as a movie producer or talent agent, since the Sherlock Holmes superstar doesn’t feel he can “beat Armstrong’s overbearing type A personality out of his DNA.”

“It’s really funny. Bob commented that if Lance’s mom thinks he’s an asshole and has been since he was 12, it might be best to put him into a new career in Hollywood that forgives his douchebag nature,” stated a close confidante.

Armstrong appears Thursday on Oprah’s talk show to offer a stage-managed confession rumored to be choreographed by Downey Jr.