Lance Armstrong filed a second motion for a restraining order against Team Sky in an Austin, Texas, court today. The restraining order is an attempt by the soon-to-be-former-seven-time-Tour-de-France champion to prevent “the stripping of the champion and his yellow kingdom of its English-speaking cycling fans.” 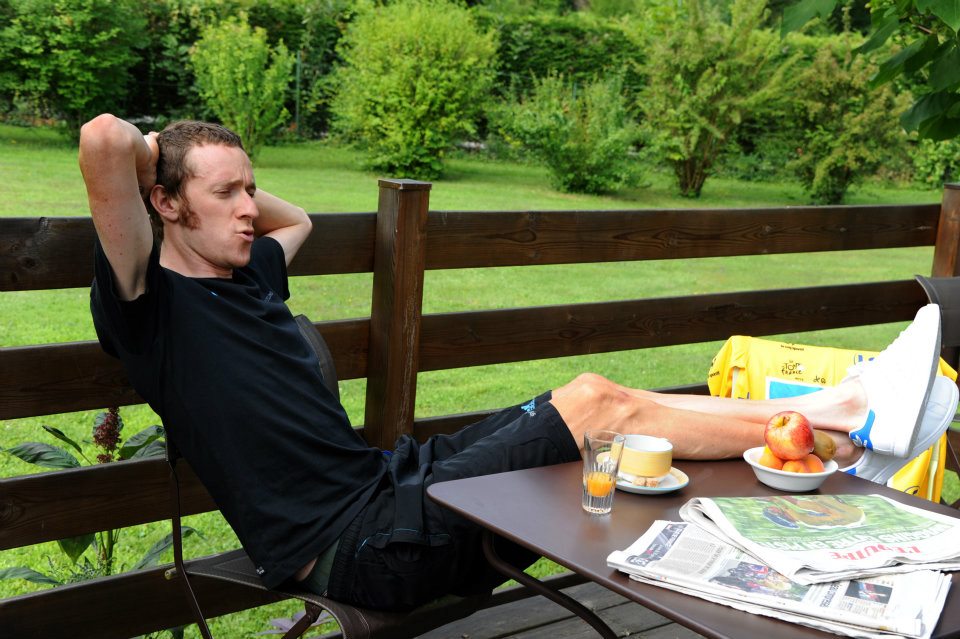 Wiggins takes a break from his photoshoot with Annie Leibovitz featuring him with several naked hot Hollywood starlets and oodles of apples. (Photo Courtesy Team Sky)

The move comes a day after the cancer fighter’s unsuccessful filing against USADA, his personal lawsuit against Jeff Novitzky, his business lawsuit against Leopard, Inc., his attempted injunction against the ASO for unauthorized use of his trademarked color for mandatory yellow helmets worn in the team competition, and his Twitter tirade against those who opposed “his eco-friendly cancer fighting throne of selflessness.”

In a 300-page filing in Austin, Armstrong outlined the case against Team Sky that included the following:

“This is a blatant copycat scheme to profit off the established reputation of my U.S .Postal legacy and the short lifespan of Team Discovery. This restraining order is an attempt to prevent the plagiarization of my legacy in the cycling world,” Armstrong stated through his legal interpreter, Mark Fabiani.

When asked what exactly his legacy to the cycling world was, Armstrong, for once, was succinct in his attack.

“My legacy is the single-minded drive to win the Tour at any and all cost while ignoring the human collateral damage, to suck the life out of every single individual around me, and to use any chemical means possible – legal or otherwise – to achieve the objectives of fame, fortune, and hot blondes,” declared Armstrong. “And I did it all with a narcissistic sociopathic tenacity heretofore unseen in cycling prior to my romp. With this lawsuit, I hope to preserve my dubious distinction.”

Team Sky representatives refused to respond to requests for interviews, as they were mired in a rest-day photoshoot with Annie Leibovitz documenting Brad Wiggins soon to be declared Tour de France victory. Harried Team Sky handlers were busy attempting to shoo away most of the Wiggins groupie contingent who flew over from Britain to join the national hysteria caused by his Armstrongesque time trial stamp of authority on Monday.

Pundits in the cycling world were divided along nationalistic lines in their coverage of the polarization of cycling fans by both Armstrong and Wiggins (another point of fact in the lawsuit), further confusing an already confusing situation.

“Frankly, I miss the days of the French champions. They use to know how to create a story or a plotline that captured the imagination of the French public. Anglo champions? They might as well be clear-cutting corporations that destroy the environment as they pass through. No imagination, no smiles, no real interest in the finer points of the sport. They just want to collect their paycheck and trophy on their way to their foundation’s boardroom to sign the next big marketing deal,” mused former Paris-Roubaix champion Johan Museeuw.

Australian pundit Mike Tomalaris was more to the point.

“It isn’t going to matter. Lance is losing his seven titles, and Wiggins is going to lose the Tour in the mountains to Cadel Evans,” declared a defiant Tomalaris.