Andy Schleck continued his protest against a conservative RadioShack-Nissan-Trek-Leopard-Luxembourgish-Capital-Sports-and-Entertainment-Johan-Bruyneel-Management-Company regime that has seen the requests of the younger Schleck fall on deaf ears. 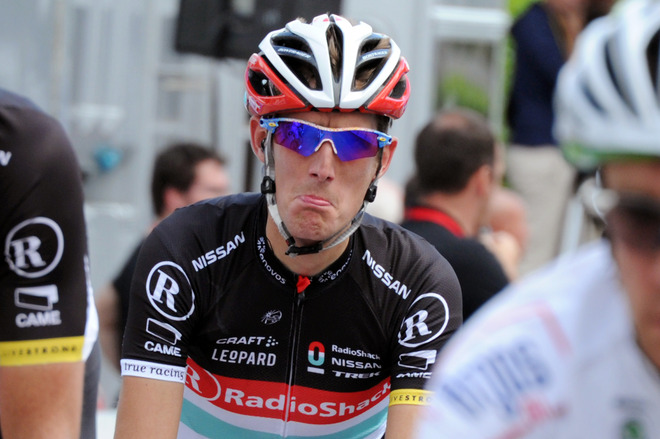 “He isn’t supposed to think. He isn’t supposed to speak to the press about anything unless I say so. He’s supposed to accept my demands, meet my expectations, and do what he is told. He has no say in his affairs. He is merely a cog in the Bruyneel machine, which has the sole purpose of promoting my exploits, nothing more. Winning is all. We must win at all costs. Winning solves everything! Win! Win! Win! Win!” stated a very animated soon-to-be-two-time-Tour-de-France-winning manager.

Billionaire playboy Flavio Becca was surprised at the turn of the events in the RadioShack-Nissan-Trek-Leopard-Luxembourgish-Capital-Sports-and-Entertainment-Johan-Bruyneel-Management-Company regime.

“I have never seen anyone so unwilling to compromise their principles for the millions I’m throwing at Andy Schleck. I’m surprised that there is anyone with morals and ethics these days. Now you must excuse me, I’m off to continue my plan to turn Belgian and Luxembourgish farmlands into American-style über-malls,” commented a matter-of-fact Becca.

The explanation for the defiantly obstreperous younger Schleck has its roots in European social politics. It seems that Andy Schleck has fallen under the strong pull of Greek Syriza party leader Alexis Tsipras, whose anti-austerity message has begun to sway power away from corporate cartels and back to the workers who create the profit for government multi-national corporate entities. Schleck has been seen on the phone, and well-placed sources in the RadioShack-Nissan-Trek-Leopard-Luxembourgish-Capital-Sports-and-Entertainment-Johan-Bruyneel-Managment-Company regime camp have confirmed Schleck has been conferencing with brother Frank and Tsipras. Their goal is rumored to be gaining more personal freedom and getting out of the oppressive Becca/Bruyneel mini-hydra.

“I cannot confirm nor deny any conversations with any professional cyclists of any nature. I will say, however, that those in the professional cycle sport are representative of the plight of all people on our planet. They receive a small pittance of compensation for the hard work they perform year in and year out. While wages have increased, the real profit and direction still lies in the unwielding control of the sport governing bodies, the teams, and the corporate sponsors. Something has to change!” declared Tsipras via phone.

Schleck refused any comments to the press after the stage, citing “discomfort and injuries” as the challenges to his Dauphiné. Reports indicate Bruyneel has been ingesting massive quantities of oxygen at a secret facility to cope with the heretofore unseen stress levels now present in his career.

Stage three of the Dauphiné continues on Wednesday.