The panel has met, the super-secret balloting has taken place, and the results are in.

The winner of the Abus Lock Haiku contest is Su Zi/@xsuzi00 with this entry:

@CyclismasEditor @Cyclismas @ABUS_Locks these precious steel tubes/ now still, but which rolled through air / with this click, stay safe.

For her efforts, Su Zi will receive a Granit X-plus Bordo lock from Abus.

Many thanks to all of you who participated, stay tuned for our next contest, to be announced on Tuesday, October 22nd.

Entries are in, let the judging commence. We will post the winner of the Haiku contest tonight. If you submitted an entry and don’t see it listed here, please be sure to contact me ASAP.

@CyclismasEditor @abus_locks One Fence One Bike No Lock No Bike #haiku 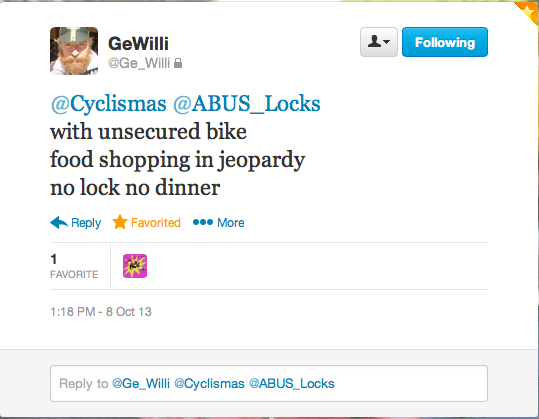 @CyclismasEditor @Cyclismas @ABUS_Locks these precious steel tubes/ now still, but which rolled through air / with this click, stay safe.

Not US resident but wrote anyway @ABUS_Locks @Cyclismas hot coffee in cafe cold approaches the frame there’s no snap this time. #lockhaiku

@Cyclismas @ABUS_Locks Crap! My bike is gone! I didn't buy an ABUS Now I ride the bus.

@CyclismasEditor @Cyclismas @ABUS_Locks no seriously / do you even see that lock? / can't steal this ride bro

Bike thieves suck my shit. What the fuck is a haiku? Lock your fucking bike. 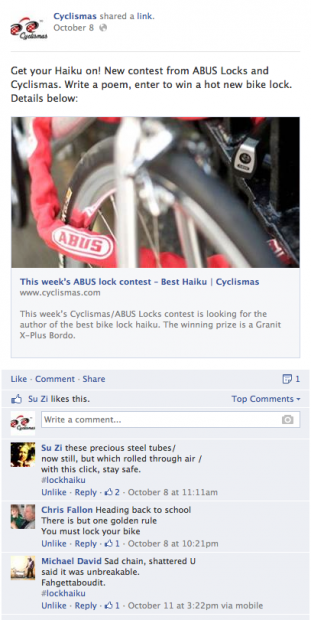