After a nail-biter of a week* wondering if the Department of Homeland Security was going to blow up my package from Vulpine® as it sat in FedEx purgatory awaiting the nod from U.S. Customs to enter “the land of the heavily-taxed, home of the paranoid,” my test sample of the Vulpine Softshell Jacket was finally delivered today.

Every garment shipped out by the clever lads at Vulpine comes in a nifty musette in their signature acid green emblazoned with the Vulpine logo. Until Team Vulpine gets the wildcard nod for entry at the Tour de France and I’m begged to swanny for their star riders, I’m sure it will make an excellent holster for groceries in the meantime. 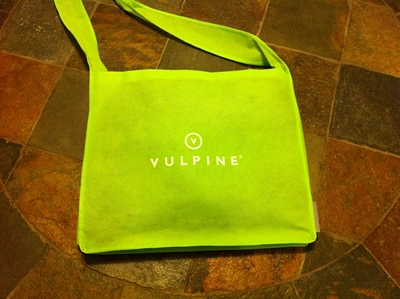 The jacket is visually stunning, and the attention to detail is borderline OCD. Made of a soft black poly-spandex blend, the jacket is purportedly wind and water resistant, although with my local weather conditions hovering in the mid to upper eighties (Farenheit) with blistering and abundant sunshine, I don’t anticipate the opportunity to test that aspect of the garment. The jacket zips up the front with a sturdy YKK zipper that features a cute little leather tab with the Vulpine “V” on the rivet; there is a near-invisible magnetic flap closure at the throat and a drawcord tightening gadget at the back of the neck; reflectorized shoulder insets and turn-up cuffs at the wrist to keep you safe and shiny; and some swell hidden drawcord adjusters inside the inner hem of the thing that tighten with acid-green plastic keepers embossed with the Vulpine name. 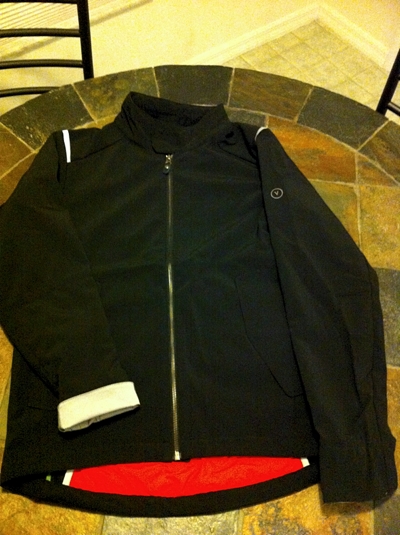 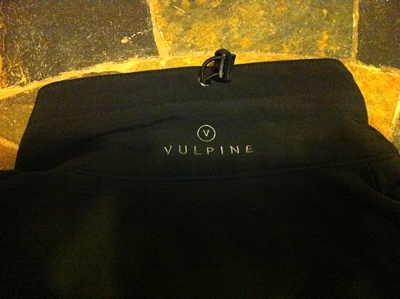 back of neck drawcord system

The front flap pockets also feature that same magnetic doo-hickey closure, as does the rear flap pocket – and all are faced in more of that signature Vulpine acid green material. (Side note: this magnetic closure system is genius. As the owner of two Jack Russell Terriers, I appreciate Vulpine owner Nick Hussey’s understanding of the pitfalls of velcro closures when confronted with the dangerous threat of white dog hair… ) The armpit area of the sleeves features a laser-cut perforated ventilation system that is visually reminiscent of the fabric that covers old-school Klipsch studio monitors. Very cool. (See what I did there?) The right sleeve has a hidden zip pocket to presumably hold your  wadded up handkerchief, and features a handy little carabiner to fasten your keys and stow them as well. 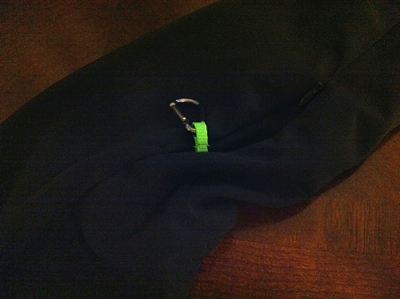 On the backside, in addition to the aforementioned magnetic flap pocket, there’s also a zip pocket with a reflectorized loop. I haven’t quite figured out what that’s for yet, but it might be to keep your electric cattle prod from flopping about as you’re hammering the pedals. Finally, there’s a clever drop-down red bum flap with the Vulpine “V” logo in reflective material. It should make my ass a splendid target next time I’m hanging out with James Stout at a bull-fight. But I’ll have my cattle prod at the ready, so game on, I say. 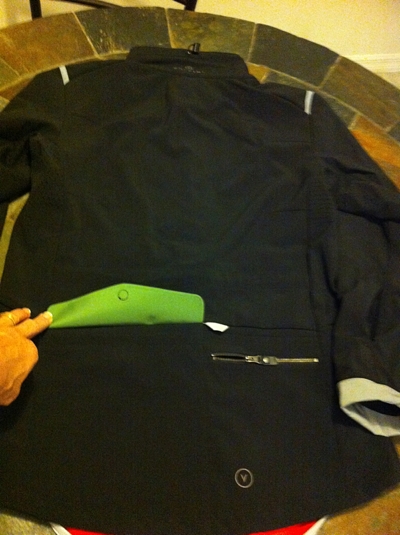 Like I said, the attention to detail is on the verge of pathologically obssessive in its scope. The interior of the jacket shows the same level of care in its finishing seam tape (also done in Vulpine acid green), garment care instructions, and drawcord channeling system. The entire garment has been so ruthlessly well-thought out, in fact, that I’m dying to see the designer’s personal organizational systems. I suspect the closets all have the hangers facing in the same direction and spaced equidistant apart, and storage bins are labeled and sorted by content, material, and season… But I digress. 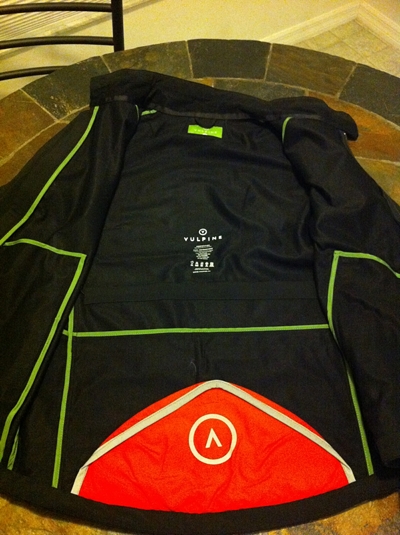 What’s a good product review if you don’t field test the danged thing? So I got up at an ungodly hour of the morning the next day to take this baby for a test ride over to the local bodega for a cafe con leche, and hopefully to rub elbows with some of the Cat 3 chaps at the neighboring bike shop as they kitted up for their morning ride. 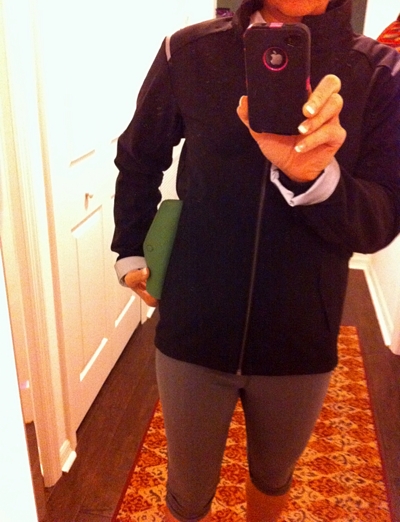 suited up and ready to rumble

Then I stepped outside, and the cicada were already humming in signal that the day was doomed to be a scorcher. The only field testing of ‘my precious’ would be in true Tour de Couch fashion. So I came back inside, turned the air conditioning down to 58, and waited for the start of the Hell of the North on Sporza. I can testify to the fact that the Vulpine Softshell Jacket kept me chicly comfortable with nary a trace of dewiness, even as the action was heating up on the roads to Roubaix and Tom Boonen was shredding the peloton with his dramatic demolition of his rivals for the crown of the King of the Cobbles.

I’ve hung the jacket on the back of my chair for the entire week now, and it’s the absolute perfect layer for those chilly mornings when I’m first embarking on an editing project in the wee hours. As the sun moves around the office and the day warms, the integrated ventilation system kicks into action, and I’m still comfy for those inevitable and deadly Skype meetings with the CCNN-TV production crew and anchors. By lunchtime, the full-length zipper provides enough extra venting when the room heats up from monitors going full blast, and after six hours in the Softshell I still feel fresh as a daisy.

If there can be any downside to this gorgeous creature, it would have to be in the care department. In spite of it being made from what should be an easy-living blend of 98% polyester/2% spandex, the laundry instructions tell me to hand wash in cold water, line dry flat (no easy feat, as most clotheslines work on the principle of vertical hanging), and cool iron inside out. Being the rather careless housekeeper that I am, most of my play clothes go in the washer and dryer without a second thought. So this will definitely cramp my style a bit, as I’m admonished not to tumble dry this garment. I suppose I could go for the dry cleaning option and be done with it, then.

But at my leisurely pace of wear, I suspect that it will be some time before I need to be confronted with Softshell’s Choice for a cleansing method.

At a retail price of £160.00/€194 (£133/$211 for non EU residents), it’s not inexpensive, but the smart and trim styling, technical and fashionista-inspired details, and bespoke craftsmanship make this softshell jacket one that I’ll reach for over and over when the temps turn cooler. You can tell that Vulpine founder Nick Hussey is passionate about his craft, and wants to create the kind of clothing for cyclists that he himself would covet if he weren’t already clever enough to have dreamed it up in the first place.

I’m grateful for the opportunity to test drive the softshell jacket from this nascent company that is a kind of cheeky British blend of Patagonia and Rapha, with a touch of Oswald Boateng thrown in for madcap fun with cut and color. In the words of “News or Not…?” reporter Frank Mercer, I give its “certain je ne sais quoi” a hearty two arms up.

Be sure to watch CCNN-TV Episode 2 for the video review of the Vulpine Softshell Jacket, along with a clever advert for sex, er, the entire line from Vulpine.

*Ask Nick Hussey and Vulpine staffer Philip Jenks to regale you over a pint with horror stories of long-form textile checklists, knots/stitches per cm, country of origin declarations, and men’s outerwear jacket vs. sportcoat jacket definitions.