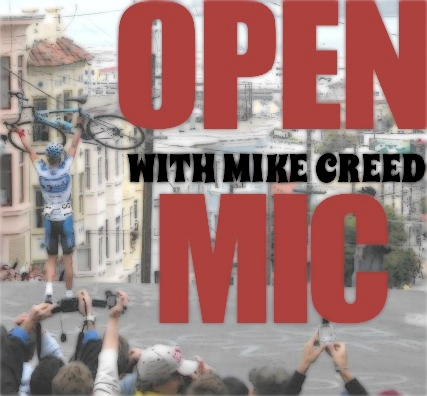 THIS EPISODE Mike shoots the breeze with old friend and best man Pat McCarty, who has spun his cranks for such teams as US Postal, Phonak, Slipstream-Chipotle, OUCH-Maxxis, SpiderTech-C10, and most recently Bissell. Along with guest interloper Shawn Milne, Mike and Pat wax philosophical on all sorts of fascinating topics including the future, what it’s like to be directing a women’s cycling team, surviving the Giro not once but twice, getting drunk with Andy Rihs, the wacky times at Ouch/Maxxis and Rock Racing, and good Cipo stories (who doesn’t love a good Cipo story?).

We also get some choice intro moments from Team Smart Stop p/b Mountain Khakis ace mechanic Chris Kreidl, and become privy to yet another of Mike’s embarrassing confessions.

As always, this episode of Open Mic is brought to you by The Colorado Cyclist, sponsor of Mike’s very first professional cycling team in 1998. Thanks to everyone at Colorado Cyclist for their support of Mike over the years, and a big thank you to them for stepping up and sponsoring the podcast and offering $50 gift cards to our Twitter contest winners. Please visit their website at coloradocyclist.com and give them a follow on Twitter at @Co_Cyclist to show your appreciation for everything they do for us.